To: All Branches, Regional Councils and Regional Organisers

I write to update you about progress with our campaigns for a reduction in the hours that drivers can be forced to work - and for an increase in the rest breaks that drivers are entitled to take.

Current position – lax UK rules
While different standards normally apply elsewhere in the EU, under UK working time rules, most bus drivers are only entitled to a break every five and a half hours.

Unsurprisingly, the productive hours (ie revenue produced by the workforce), which transport companies extract from labour has in the last couple of years reached a record high - around 15% more than in the mid 1990s[1]: 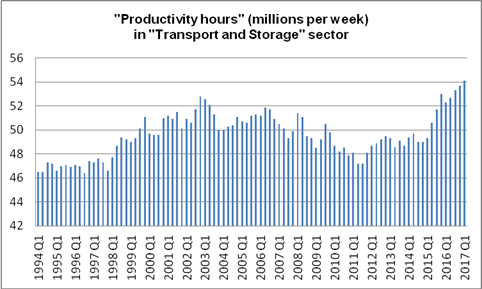 THINK! Campaign - Government recommendations
Lengthy periods of driving increase the risk of accidents occurring and injuries being sustained by passengers, pedestrians and other road users[2]. The UK government’s road safety campaign “THINK!” highlights results of research and provides guidance. The campaign suggests that every two hours, motorists should take a 15 minute break from driving[3]. That is sensible advice based on rigorous, scientifically-conducted analysis of driving performance and the occurrence of near-misses/ accidents.

The Chief Medical Officer has declared that the amount of time which an individual spends sitting, should be minimised. Further, that seat-based work should be regularly broken up with active-movement breaks (for a minimum of two minutes, at least three times per hour).

Accordingly in March 2016 we wrote to all bus companies with whom we have representation rights, highlighting the health implications for our driver members of prolonged sedentary working (ie sitting at the wheel without sufficient opportunity to intermittently stand/ walk about).

We received the following response from Stagecoach suggesting that there were significant numbers of drivers who wanted to work overtime and that this was, in the company’s view, suggestive that our members are happy with their working conditions:

“Generally, we would always seek to restrict the number of hard wired scheduling parameters to the legal requirements in order to retain the maximum flexibility both to achieve efficient duty schedules and good working arrangements for staff.

Inefficiency simply increases labour cost which then constrains rates of pay. Every scheduling constraint has a cost.

Producing duties which are unpalatable to staff increases absence levels and turnover which impact on service reliability and cost.

It is clearly in everyone’s interest to work toward producing efficient, attractive duties.

Experience has shown us that one driver’s “bad” duty can be another driver’s “good” duty and, therefore, rostering has a significant part to play in delivering efficiency and contented staff by packaging duties into rotas staffed by volunteers.

Beyond that, if we insert a hard constraint to, say prohibit duty pieces in excess of 4.5 hours, this will have knock on effects in other ways changing the characteristics of other duties. For example, where there is a restriction on driving time to 4.5 hours, we are more likely to see a greater number of 3 part duties which are, themselves, often unpopular.

Many sets of schedules will have 98% ok duties and 2% not so ok. Hardwiring the conditions which make that 2% unattractive could produce an overall poorer mix of duties.

We have always been open to discussing schedules with staff representatives and have, for example, conducted a number of exercises at depots across the UK to eliminate duty pieces over 5 hours. To date, every time we have done so the local staff have opted to leave things alone as the knock on effects of the constraint produce an overall worse set of duties.

Rather than insert additional arbitrary constraints, we would encourage dialogue locally between representatives and local management to work together to produce the optimum set of duties and rostering arrangements which deliver efficiency and staff satisfaction based on the particular preferences of the staff at each location.

We received no written response from any other company. Although no other companies replied, our letter has formally placed companies on notice of the health issue. Specifically, it will be harder for them to subsequently claim ignorance of the consequences of their inaction.


ITF – Resolution to the International Transport Workers’ Federation
We recently placed the following resolution before the ITF Road Sector Conference in Brussels raising health issues, and arrangements for shift working and coordination of union activity:

“Conference notes that being sedentary (such as sitting driving a bus) for prolonged periods has negative health implications, specifically prolonged sedentary work leads to a significant increase in the risk of heart disease, diabetes, obesity, certain cancers, depression and muscle and joint problems.

Conference further notes that there is a significant amount of scientific research which now exists to substantiate these concerns.

Conference is deeply concerned that current arrangements for organising bus drivers’ shifts and rotating duties are inadequate and that ITF affiliates must now coordinate our efforts to facilitate our members benefiting from vital physical activity.

Conference therefore calls on the ITF, as an initial step, to encourage and coordinate the sharing of information amongst affiliates to establish best practice in regards to the hours and breaks of bus drivers, and other road transport workers.”

The resolution was adopted unanimously.


Bus Services Act – New clause
We took the opportunity of the passage of the government’s Bus Services Bill through Parliament, to mobilise friendly MPs to highlight problems which bus workers face, including in relation to hours/ breaks.

More concretely, we drafted a new paragraph to be inserted into the draft Bus Services Bill. This clause was designed to introduce new maximum driving hours and more generous breaks for drivers. We discussed the issue with the Labour Party’s then Shadow Bus Minister, Daniel Zeichner (MP for Cambridge) who was co-ordinating opposition to the bill. We achieved his support for raising concerns and seeking to amend the bill.

Although the clause did not make it into the Bus Services Act, the issues has been pushed up the political agenda.


Lobbying government
With Ian Mearns MP, Convenor of the RMT Parliamentary Group, we met with Andrew Jones MP, the minister at the Department for Transport with responsibility for buses. We set out for him our concerns about rest breaks for drivers. The government acknowledges the importance of the issue. However, it declines to introduce any legislative/ regulatory changes on the basis that to do so would impose an unreasonable burden on industry. Following the meeting, Andrew Jones replied in writing as follows:

“The drivers’ hours rules (both domestic and EU) are in place to protect road safety, by limiting the time drivers spend at the wheel, which in turn help reduce the risk of drivers being involved in fatigue-related accidents. They are also in place to ensure there is fair competition across the industry and to improve the working conditions of drivers. The majority of bus drivers fall under the GB domestic driver hours. These rules limit daily driving to 10 hours. Drivers must also take a break of at least 30 minutes after 5.5 hours’ continuous driving and for each 24 hour period, drivers must take a rest of at least 10 hours. The domestic rules are vital in ensuring the safety of drivers and others on the road, but any further restrictions risk imposing unreasonable burdens on industry. That is why the Government decided in 2010, following an extensive review, not to make any changes to the existing domestic drivers’ hours’ legislation.”


Next steps – Challenges and opportunities
This issue of hours and breaks remains a high priority and we will be working with branches to explore how best to pressure employers to review existing arrangements. The forthcoming departure of the UK from membership of the EU presents challenges (preference of the current government for diluting existing regulations) as well as opportunities (ability of UK to deviate from the minimal protections set out under EU law).

The new reality of a minority government and finely balanced composition of the House of Commons may also present fresh opportunities to initiate and progress new legislation not supported by the government. Accordingly, when Parliament reconvenes in the autumn, we will again be lobbying politicians for a change to the law.