To the Secretary, all Branches and Regional Councils
Tuesday 16 August 2016

INFLATION: FOOD AND FUEL PRICES UP (following Sterling fall & more money printing)
WITH PRICES OF OTHER IMPORTED GOODS SET TO RISE TOO (c10% by mid-2017)

Some employers/ government agencies are attempting to sideline RPI and are instead pushing other measures of inflation – such as CPI (0.6% for the year to July 2016) or CPIH (0.9% for the year to July 2016). Both CPI and CPIH are inappropriate for use in settling pay claims. This is because they are designed for comparing different countries’ economic performances, rather than average workers’ costs. Furthermore, CPI and CPIH tend to understate changes in the cost of living: 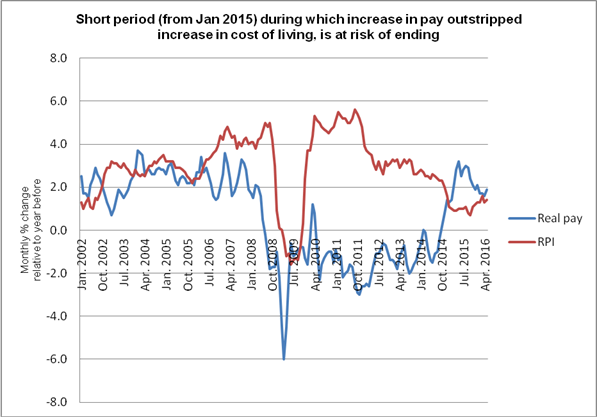 Attempts by an employer to link pay awards to CPI or CPIH must be resisted and logged with the Policy Department.

Further information will follow in the Pay Bulletin presently.