To the Secretary, all Branches and Regional Councils
Tuesday 15 August 2017

How has the cost of rail changed since Jan 2015, relative to other modes of transport? 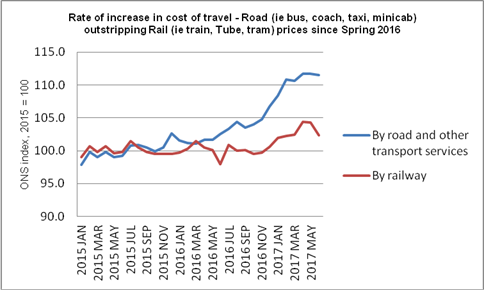 
What is RPI? It measures inflation as experienced by working households
In 1914 an indicator of inflation called the “Cost of Living Index” was established. It was designed to chart the increase in the costs of workers’ basic subsistence items.

The CLI was subsequently expanded to measure changes in prices facing whole households, and in 1947 it was renamed the Retail Prices Index. The RPI - which excludes data on the spending habits of the parasitic class (ie the richest 4% of households) - was from its inception therefore, designed for use by us.[1]


What is CPI? It is a tool for measuring the overall performance of the economy
By contrast, CPI – which was formulated by the European Union’s statistics agency, Eurostat -measures overall national economic performance. Specifically, CPI was introduced to help assess the eligibility of countries to transition to use of the ruinous Euro currency.

The Royal Statistical Society – the respected professional association for statisticians - explains that CPI was not designed to measure “inflation as perceived and experienced by households.”[2]

CPI includes elements irrelevant to ordinary workers, such as stockbrokers’ fees and foreign students’ university tuition fees - and it also excludes most taxes.[3] Unsurprisingly, CPI is “broadly representative of the price experience of households around two-thirds of the way up the expenditure distribution”.[4] In other words, CPI is the measure for wealthier households with spending habits significantly looser than the average.

The Royal Statistical Society confirms that: “[The calculation method used in CPI gives] a higher weight to the higher-spending households. We [ie the RSS] do not believe this is correct for a household-based index, which should aim to measure inflation as it affects typical households.”[5]


Why has RPI recently been criticised?
At least since George Osborne was Chancellor, the Office for National Statistics has been required to selectively sideline RPI and push CPI (and now a new version of CPI called CPIH). Further, some influential news outlets such as the Daily Mail and The Times have been waging a sustained campaign against the use of RPI.

The stated reason is that RPI is underpinned by a mathematical formula which is currently out of fashion. In fact, at its January 2016 meeting, the National Statistician’s “Advisory Panels [Technical and Stakeholder] on Consumer Prices” found that the formula used in RPI is no better or worse than alternatives: “Panel members agreed that the relative merits of the mathematical properties of elementary aggregate formulae were finely balanced.”[6]

The real reason that RPI is being slated by the bosses and their mouthpieces is that RPI generally records higher rates of inflation than other measures – leading to higher wage settlements, than those based on alternative measures such as CPI.

What do other countries do? No other country uses CPI for domestic purposes
The Royal Statistical Society explains that “nearly all EU countries...use their own national indices [ie their equivalents of RPI] as their main uprating index. Accordingly the RSS finds that: “The UK would therefore be out of line with most international practice if it adopted the CPI, or a close derivative such as CPIH, as its main uprating index.”[7]

The Royal Statistical Society adds that: “Neither the CPI, nor any index closely derived from it or established on similar principles [such as CPIH], will do.”[8]


RPI could be updated
The Royal Statistical Society has proposed that RPI or its derivative RPIJ be updated. Further, the RSS calls for work on a new similar measure of inflation called “Index of Household Prices”, the status and purpose of which will – not least through its name - be clear to users.

However, instead the ONS has been directed to freeze all work on RPI’s methodological framework[9]. Further, its director has been publicly critical of RPI.

The ONS is instead promoting the discredited and inappropriate measure CPIH as an alternative to RPI. More positively, the ONS has agreed to work on a new household weighted index (ie RPI type rate) which would be known as the “Index of Household Payments”.


RPI is vastly superior to CPI
The Royal Statistical Society finds that “Clearly it [CPI] cannot as it stands be considered a suitable measure of the median or modal household...[while RPI] is noticeably closer in practice to a household weighted index than the CPI.[10]”


We will continue to resist the use of CPI or CPIH in pay negotiations/ the settling of pay deals.