To the Secretary, all Branches and Regional Councils
Tuesday 18 July 2017

INFLATION HIGH NOW, BUT LIKELY TO TREND LOWER IN 2018 – SO CONSIDER

PRESSING FOR LONG PAY DEAL, BASED ON INFLATION RATE IN OCT/NOV/DEC 2017 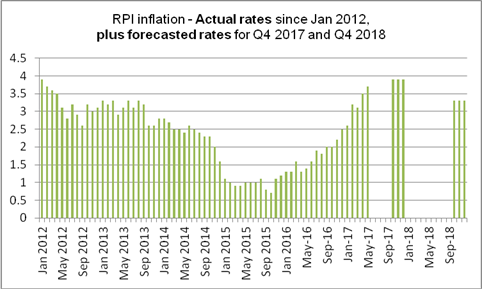 However, although CPI and CPIH are lower than RPI, the three rates do generally track each other – meaning a rise or fall in one rate is likely to be mirrored in the others. As the government is trying to promote the use of the less generous CPI and CPIH rates, more extensive data on those rates is being made available by government agencies. That data – though specific to CPI and CPIH - can also be helpful in spotting likely trends in RPI.

For example, data produced in May by the Bank of England on CPI, confirms the more limited data available on RPI above. Specifically, inflation is set to peak in the final three months of 2017 – see second pair of columns in chart below: 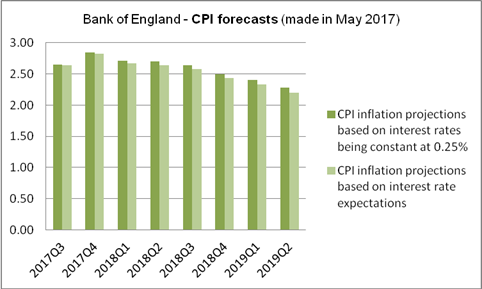