Definition of Member
1. In these Rules “Member” means:

(a) any worker employed in the Maritime industries or any transport undertaking or subsidiary thereof, or;

(b) any worker contracted to work in the Maritime industries or any transport undertaking or subsidiary thereof, or;

(c) any worker employed by, an undertaking or subsidiary thereof which has an association with the Maritime or transport industries;

(d) any person appointed and employed by the Union;

(e) any member that has retired from employment and has received Retirement Benefit under Rule 18 will become a Retired member and will be allocated to the appropriate Retired Members’ Branch.  Retired Members shall be debarred from voting and participating in Union elections and shall be confined to matters relating to retirement and recruitment and retention of members.

who has been admitted into membership in accordance with the provisions of this Rule and who thereafter is not at any time more than eight weeks in arrears with their contributions, unless otherwise exempted by these Rules. The period for which any member who, on the day before the effective date, was a member of either the National Union of Railwaymen, the National Union of Seamen or the Offshore Industry Liaison Committee, shall constitute an equivalent period of membership of the Union in respect of any benefits, entitlements or elections governed by these Rules.

Allocation
4. For membership purposes, the National Executive Committee shall have power to allocate specific depots, ports, stations or areas to particular Branches of the Union and to ensure that any such allocation is duly implemented.

Transfer
5.   Any member wishing to be a member of a Branch other than the one to which his or her workplace is allocated under Clause 4 above, shall apply to the Branch Secretary of that Branch and if the Branch agrees acceptance, shall apply to the Secretary of the leaving Branch for a transfer, which shall be forwarded within seven days of the application being received. In the event of any Branch refusing to accept a transfer the member shall have the right to appeal to the National Executive Committee.

Rules Binding
6. Every member of the Union shall accept and be bound by these Rules, as amended from time to time. The rights of members in connection with the Union, and the settlement of all disputes between the Union and its members or any person who has ceased to be a member thereof, shall be regulated exclusively by the provisions of these Rules, and in particular the provisions of Rule 4, Clause 13 and Rule 3, Clause 20, shall apply in each case.

Contributions
7.   All members of the Union as defined by Rule 2, Clause 1 (a, b, c, d) shall pay a weekly membership at either the Full Rate or the Low Rate as set out in these rules.

9. The Low Rate shall be calculated at 43% of the Full Rate to the nearest full pence.

10. Each year the Full Rate contribution shall be varied, but not decreased, in the same proportion as the percentage change in the retail price index in the preceding September, calculated to the nearest full pence. When considered necessary, the General Secretary may request that the National Executive Committee review and determine the application of the resultant potential increase in the Full Rate contribution.

11. From the weekly contribution of each member the amount of £0.08p shall be allocated to the Orphan Fund, £0.02p to the National Dispute Fund and £0.06p to the Legal Fund. This is to be revised following subsequent actuarial valuations.

Contributions Levy
12.  Members shall also pay, as part of their contributions, any levy required to be paid by decision of the National Executive Committee or an Annual or Special General Meeting.

13.  With effect from 1st October 2015, the Low Rate shall be applied to members whose basic salary or equivalent earnings are less than the Earnings Threshold. In each subsequent year the Earnings threshold shall increase by the percentage change in the retail price index in the 12 month period up to the preceding September, rounded to the nearest hundred pounds, or, by an amount decided by the National Executive Committee.

14.  The Low Rate contribution shall be applied to members whose basic salary or equivalent earnings are less than the Earnings Threshold verified by collective agreements, or annual proof of earnings statement, such as a P60 certificate, or other appropriate document supplied by the member each year.

16.  Where the situation arises when a member, or group of members is required to move to the Full Rate contribution, a transition arrangement will be used whereby the movement to the Full Rate will take place in stages.

Employed outside of transport industry

This status of membership may apply for a maximum of twenty-four months after which membership will be terminated.

Exemption18.   A member who is absent from work due to either:

may seek an exemption from the payment of contributions for the period of absence in which wages, company sick pay or company maternity pay is not received.

A member who is on an unpaid employability or work experience placement scheme within the Maritime industries, a transport undertaking, subsidiary or association as defined by Clause 1 of this Rule, shall be exempted from payment of membership contributions for the period of the placement.

A member who becomes unemployed may be exempted from the payment of contributions for the period of unemployment.

All exemptions from contributions shall be limited to twenty-four months, during which time they will retain full entitlement to benefit.

For the purpose of Rule 15, members that have been terminated from employment, by reasons other than redundancy, shall be exempted from contributions while unemployed and not in receipt of wages until the conclusion of the case.

19.  In order to qualify for exemption from the payment of membership contributions, as defined in Clause 18 of this Rule, a member shall provide appropriate evidence in a manner approved by the National Executive Committee at intervals not more than 26 weeks from the date of unemployment or incapacity for work commenced. In the absence of such evidence, Union membership contributions shall be due to be paid at the relevant rate specified in Clauses 7-17 of this Rule. All documentary evidence submitted in accordance with this Rule, which is received by Branch Secretaries shall be forwarded with returns of Branch income and expenditure to the Union's Head Office.

Redundancy
20.  Members with not less than 52 weeks' full membership who have been made redundant from employment as defined in Clause 1 of this Rule, and who pay the Low Rate of membership contribution, shall be given credit for full continuous membership in the event of returning to employment as defined in that Clause within a period of twenty-four months. Relief from payment of such part of the contributions as is allocated to the Political Fund shall be given to members entitled thereto in accordance with the provisions of Rule 23.

For the purpose of Rule 15, members that have been made redundant are required to pay the Low Rate contributions for the duration of the claim.

Members in other employment will not be considered for legal representation unless the incident arose while employed as defined in Clause 1 of this Rule and in benefit at the time of the incident.

21. Any member of the Union whose contributions are eight weeks or more in arrears whilst in employment shall cease to a be a member, unless they can show good reason to the contrary, including negligence on the part of the employer or the Branch Officers. All fines, levies and monies not paid when due shall be considered arrears of contributions, part payment of which may or may not be taken, as the Branch may decide.

Any member whose membership is to be terminated under this Clause shall be given notice as provided in Clause 26 of this Rule.

22. Any member who has fallen out of benefit, or has left the Union whilst continuing to be employed as defined in Clause 1 of this Rule, and is re-admitted into membership, will serve a qualifying period of six months and pay at least six months’ contributions before having entitlement to benefits in accordance with the provisions of Rules 17-21, or being entitled to legal assistance in accordance with the provision of Rule 15.

Copy of Rule Book etc
23.  A member of the Union shall be provided with access to a copy of the Union’s Rules, Annual Reports, the Minutes of Annual or Special General Meetings and those of National Executive Committee Meetings, at the request of and cost to the member and without charge to Regional Councils and Union Branches.

24. The National Executive Committee may expel from the Union any member or members who in its opinion has or have:-


(a)  conducted themselves in a manner deemed to be inconsistent with membership of the Union;

(b)  injured or discredited the Union or otherwise acted contrary to the interest of the Union and its members;

(c)  refused to undertake or to comply with the duties imposed by these Rules;

(e) knowingly participated in or been party to misrepresentation, misappropriation, misapplication or fraud in respect of any of the funds or benefits to which these Rules apply;


(f)   attempted to bring about the dissolution of the Union other than in accordance with the provisions of Rule 25.

25.   Every expelled member shall cease to have any claim on the funds and benefits of the Union, and shall forfeit all right to participate in the privileges thereof.

26.   It shall be necessary to give notice to any member of the intention to proceed under this Rule and of the grounds or matters the National Executive Committee are proposing to consider. Every expelled members shall afterwards receive notice of expulsion and the grounds thereof, and thereupon have the right to appeal to the Annual General Meeting. This appeal shall, as provided by Rule 4, Clause 7(h), be the sole method by which every or any decision given in purported exercise of the powers conferred by the Rule shall be questioned, controlled, reversed, or suspended.

TUC Disputes Committee Decision
27. Notwithstanding anything in these Rules, the General Secretary or the National Executive Committee may, by giving six weeks’ notice in writing, terminate the membership of any member if necessary, in order to  comply with a decision   of  a disputes committee of the Trades Union Congress.

28.  In addition to the categories of membership described above, the Union shall also confer honorary membership upon distinguished individuals in recognition of their outstanding contribution to the international working class and labour movement. Honorary membership shall be conferred on an ad hoc basis by the National Executive Committee or the Annual General Meeting on the recommendation of Branches and Regional Councils and shall not carry with it any entitlement to membership benefits. 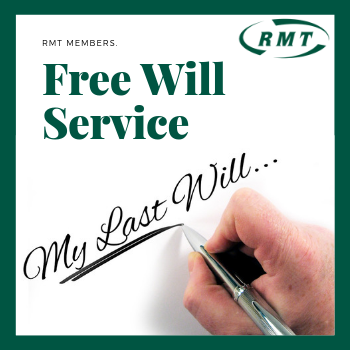