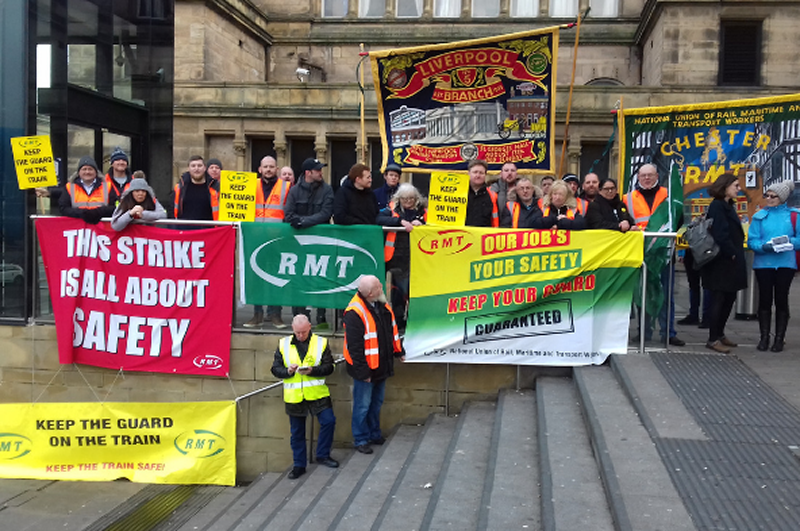 RMT says 47th day of strike action solid again on Northern Rail as union prepares to lobby Transport for the North on Thursday.

RAIL UNION RMT said that a 47th day of strike action on Northern Rail remains absolutely solid today in defence of rail safety and the role of the guard as the union prepares to lobby‎ Transport for the North in Chester next Thursday as follows;

‎The union has also called a major public meeting in the city later that afternoon where speakers will include general secretary Mick Cash;

There is also fresh speculation over Deutsche Bahn's plan to sell off the Arriva outfit as the basket case ARN operation sank to second from bottom in the passenger satisfaction league tables this week.

Instead of looking for a negotiated settlement the company continue to treat their staff and passengers alike with absolute contempt while spewing out a stream of lies designed to obscure their intention to run services wholesale without a safety critical guard on board.

“RMT members are standing rock solid again today for the 47th day in support of a safe and accessible railway for all in the long-running fight to put public safety before private profit.

"The action comes in the week that Northern slumped to second bottom in the league tables on passenger satisfaction and speculation ramped up about a fire sale of the Arriva operation by their owner Deutsche Bahn.

"On Thursday we will be lobbying members of Transport for the North over the dispute at their meeting in Chester and we will be setting out the case for the guard and safe, accessible services on Northern trains ‎at a public meeting later that afternoon.