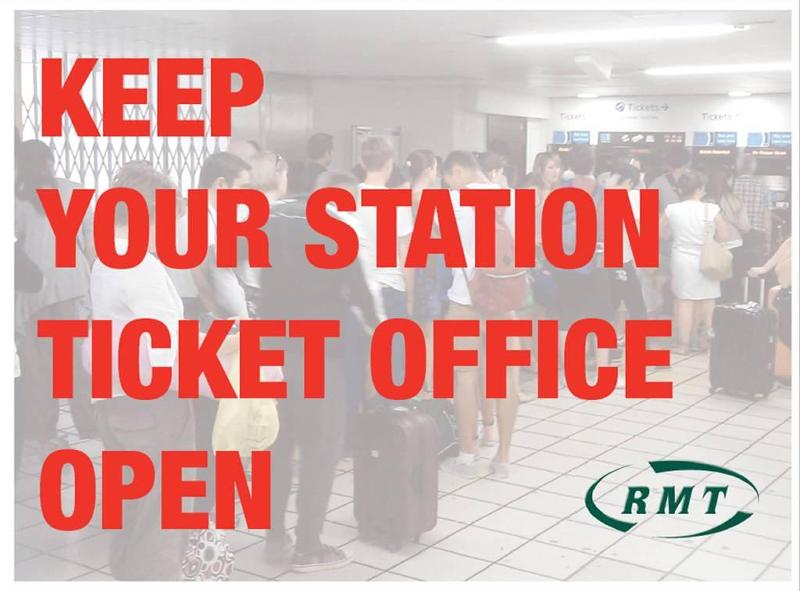 As consultation gets underway, transport union RMT has confirmed today that it is stepping up the fight against the London Mayor’s proposals to close a number of ticket offices across north London that were once part of the “Silverlink” line. RMT activists and supporters will be leafleting passengers at several locations including Queen's Park, Wembley Central, and Harrow and Wealdstone during the morning rush hour from Monday 18 January, with a demonstration planned at Queen's Park from 07.30 on Wednesday 20 January.

The background to the closure programme is all about Transport for London facing accelerated budget cuts, London Travel Watch is now formally consulting as it is required to do as these are ex National Rail stations.

This is because passengers:

-would not be able to access the full range of tickets and services they need from a ticket machine;

-would find it harder to obtain advice on ticket and fare options without a staffed ticket office;

-would be confronted with insufficient numbers of ticket machines (due to them being in high demand or faulty) and would experience delays and the concourse would be more congested;

-would be vulnerable if they were less technically minded, perhaps including the elderly, disabled or visitors, who may be less confident using a ticket machine and could end up overspending or being deterred from travel;

-would be confronted with understaffed and sometimes unstaffed stations which will make it harder to provide a safe network, with CCTV left unmonitored.

“RMT is opposed to these cash-driven, ticket office closures across a swathe of north London which we believe will lead to passengers getting ripped off and which will create a criminals’ paradise as stations are left understaffed and unstaffed in the drive to meet Government spending targets.

“RMT is launching a campaign to harness public opposition to this latest blast of ticket office closures and we are asking the public to stand with their staff and to register their formal opposition on the London Travel Watch website.”