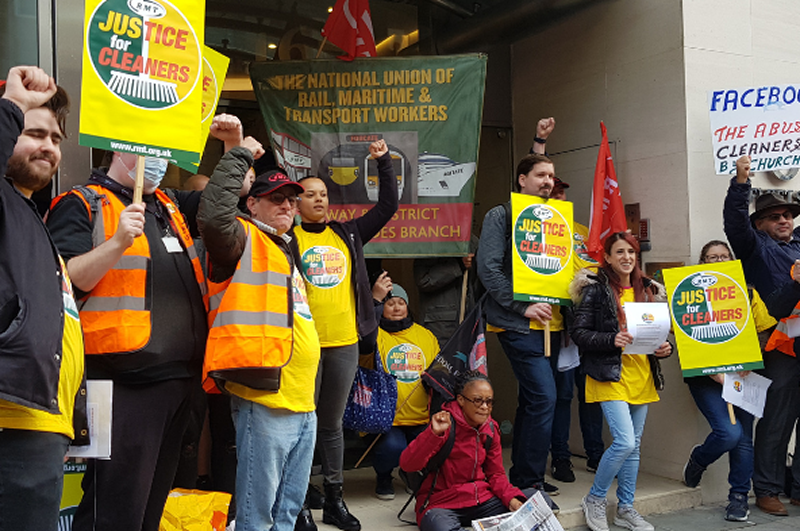 Low paid rail cleaners who work for Churchill Group will protest outside the offices of their employers and the train operating companies that contract them will protest tomorrow, Friday 26th November, as part of their fight for pay justice.

The cleaners who work on Thameslink, Southern, Great Northern, Southeastern, HS1 and Eurostar trains and stations will be calling for a new deal that recognises the essential nature of their work.

Many of the cleaners employed on the South-East’s rail network are employed on the minimum wage while none of them have company sick pay or travel facilities equal to other rail staff.

“Our members’ case is unanswerable. They’ve worked through the pandemic on low pay, without sick pay, without travel facilities, often short of equipment and increasingly understaffed and overworked.

“The train companies spend money on glossy posters and adverts saying how much they care about cleaning, but the dirty truth is that they turn a blind eye to the grossest exploitation from outsourcing companies like Churchill because it means bigger profits all round.

“Our members are sick of it and if Churchill don’t address our cleaners’ claim for pay justice, we’ll be looking at balloting for industrial action before long.”

On Friday 26th November, the protestors will assemble outside Southeastern Trains Limited’s offices at Tooley Street, near London Bridge (4 More London Riverside, London, United Kingdom, SE1 2AU) at 11am and take their protest to Southeastern Trains, then move on to Govia’s offices at Monument for 12pm and Churchill’s Fleet Street Offices at 2.30pm.

Last week the union published an appeal to the judges of the Annual Cleaning Excellence Awards to recognise the plight of these cleaners: https://www.rmt.org.uk/news/rmt-submission-for-annual-cleaning-excellence-awards/