Day of action this week to save 51 Overground ticket offices 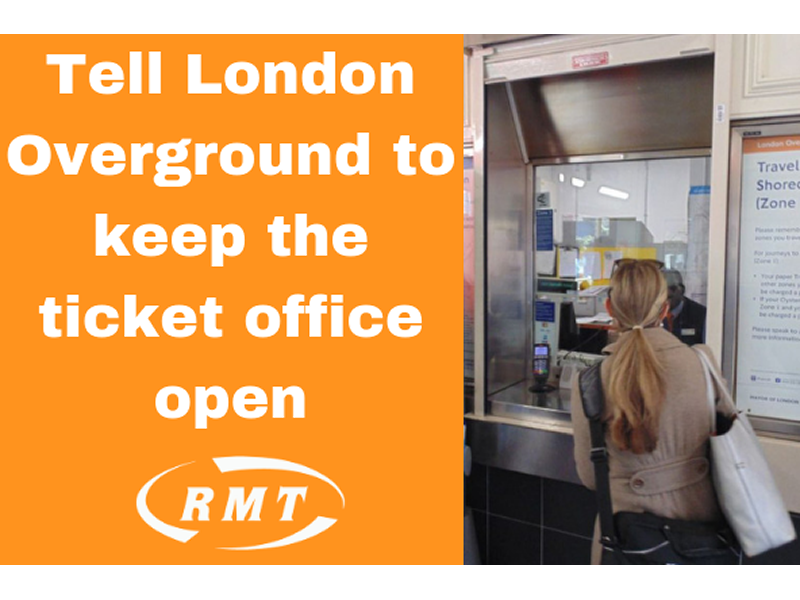 RMT day of action this week in campaign to save 51 London Overground ticket offices.

RAIL UNION RMT will be holding a day of action on Wednesday as part of the campaign to save 51 London Overground ticket offices.

Arriva Rail London (ARL) and Transport for London (TfL) have launched a formal consultation on the proposed closures which ends on 11th October.

The union will be leafleting stations with campaign postcards this Wednesday - 3rd October - as part of the day of action.

A campaign page on the RMT website at http://bit.ly/2QNLYkE allows supporters to send an e-mail direct to London TravelWatch opposing the station closures.

•        Find it harder to obtain advice on tickets and fares

•        Would be frustrated that there were insufficient numbers of ticket machines

•        Who are disabled, elderly and vulnerable may be less confident using a ticket machine and may end up overspending or being deterred from travelling; and

•        That by leaving stations understaffed and sometimes unstaffed it will make it harder to provide a safe and secure environment — especially with CCTV left unmonitored.

“I am calling on Mayor of London Sadiq Khan to oppose this retrograde plan for wholesale closures in the strongest possible terms. Ticket offices play a crucial role at train stations.

“London needs to greet its passengers, visitors and tourists not with a machine, but a welcoming and friendly ticket office who can provide a full range of services.

There will be an event for press and media with RMT national officials opposing the ticket office closures at Camden Road station at 8am on Weds 3rd October.