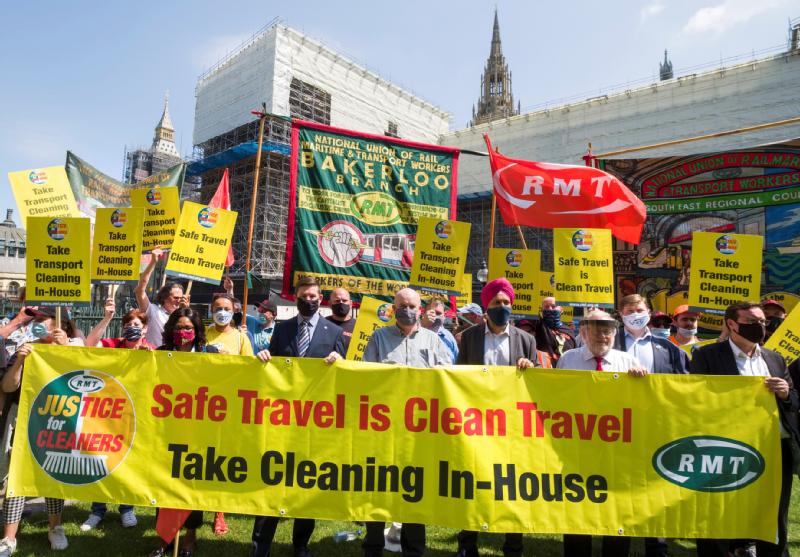 At 12pm today (Friday), heroic cleaners who put their lives on the line throughout the Covid-19 pandemic will deliver a petition to Govia Thameslink Railways’ headquarters in London protesting about pay and conditions and calling on the company to step in and tackle low pay among its sub-contracted cleaning staff.

‎GTR outsources its cleaning to Atalian Servest on the Southeastern franchise and to Churchill on the Thameslink, Southern and Great Northern franchise. As RMT research showed recently, outsourced cleaning is associated with low pay, poor conditions and job cuts, as companies extract profits by cutting labour costs. The union has also warned that this endangers public health.

RMT recently conducted a survey of these workers, employed by Atalian Servest and Churchill, which revealed the cost found that:

RMT’s campaigning for these heroic essential workers to be given a pay rise, sick pay and travel facilities.

RMT General Secretary Mick Lynch said,
“The pandemic has shown everyone just how essential cleaners are, so it’s time GTR realised the days when they could be shuffled off into outsourcing companies and forced to endure low pay and appalling conditions are over.

“GTR set and fund these contracts and as our survey results show, they cause real misery as companies like Churchill and Atalian suck profits out at the expense of people who have put their lives on the line during the Covid crisis.

“GTR need to step in and take responsibility because this super-exploitation is on them. Our members deserve decent pay, sick pay and the same conditions that other rail workers get.”

1. The petitions will be delivered to GTR, Monument Place, 24 Monument Street, London, EC3R 8AJ by a delegation of cleaners at 12pm.

2. Read RMT’s research on outsourced cleaning in the rail industry, ‘Cleaning Up the Railway’, here: https://issuu.com/rmtunion/docs/rmt_20report_20-_20cleaning_20up_20the_20railway_2

The Living Wage Foundation (LWF) defines the Real Living Wage as £9.50p/h for those working outside of London, and £10.85p/h for those working inside of London. We the undersigned are KEY WORKERS who you choose to underpay for the essential work we do in keeping trains clean and covid-free. We Churchill cleaners on GTR contracts are among the last transport cleaners in the country to be paid poverty wages, with most railway employers now paying the LWF Real Living Wage. Churchill already pays the LWF on several other railway contracts. Why are we worth any less?

The situation is a disgrace and we demand that GTR and Churchill agree to pay us the LWF Real Living Wage with immediate effect.

We the undersigned have kept Southeastern trains clean and sanitized throughout the pandemic and have played a key role in restoring the confidence of customers travelling on the network.

We have not been given a just share of the earnings from Southeastern.

Whilst Southeastern directly employed staff quite rightly have additional benefits, such as company sick pay and free travel facilities, we - the lower paid - have neither. Why are we worth any less?

The situation is beyond disgraceful, that while we are supposed to be a part of the same team, we are treated like second class citizens. We demand that Southeastern and Atalian Servest agree to provide us Company Sick Pay and free travel facilities, equal to directly employed Southeastern staff, as well as a with a proper pay rise.