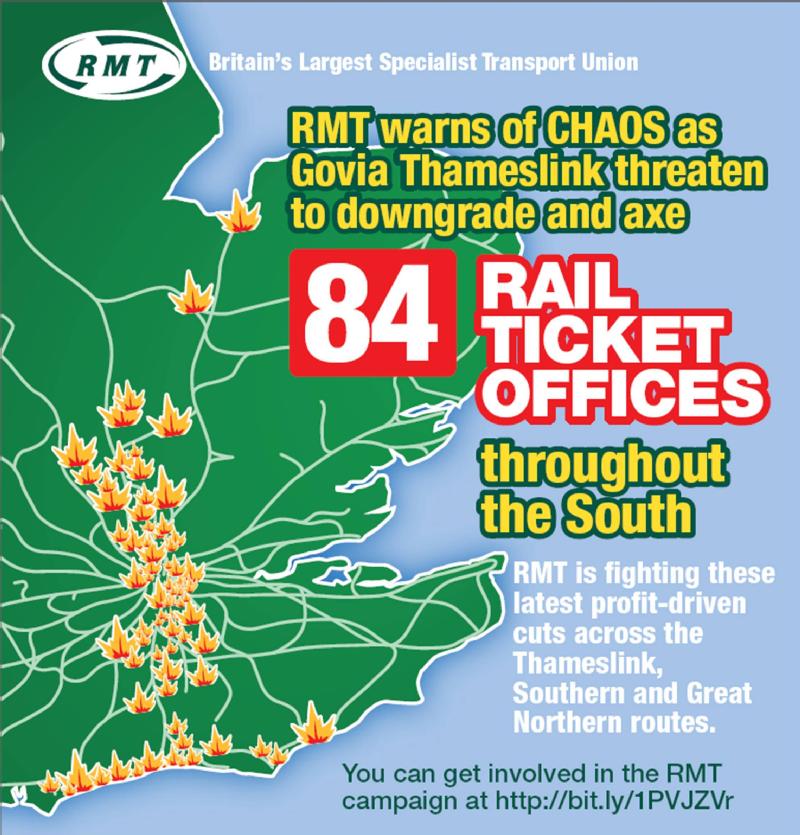 AS THE PASSENGER  body responsible for stations outside of the Capital, Transport Focus, today joined London Travel Watch in opposing the Govia Thameslink ticket office closure proposals, rail union RMT has called on Claire Perry, the Parliamentary Under-Secretary of State for Transport, to do likewise and reject the whole package.

RMT has worked with sister unions and the travelling public to mobilise a massive campaign of opposition to the proposals to wipe out ticket offices at 83 stations across the South East from the south coast, up through London and up into Hertfordshire and Bedfordshire, the length and breadth of the Thameslink, Southern and Great Northern routes. In response to that campaign both of the passenger bodies responsible for the statutory consultation have now knocked them back.

RMT says that it is now down to the Government to honour their word and scrap them entirely.

The Minister made it crystal clear in a parliamentary debate on this issue on the 16th March, that on this issue “Nothing can happen without the Department’s say-so”. RMT now calls on her to reject these proposals in their entirety. That will reassure all the MP’s and passengers who spoke out against the disastrous plans by GTR to close over eighty ticket offices.

She went on to say in that parliamentary debate:

“I will commit today to having a deep-dive conversation with my officials and the franchise so that we can get to grips with where it is on the roll-out of the Key card and how that relates to ticket office closing hours. If we are going to do smart ticketing, let us do it right”

“Getting it right by passengers means Ministers listening to the overwhelming public rejection of the GTR ticket office wipe out, now confirmed by both London Travel Watch and Transport Focus,  and that can only mean scrapping these plans completely. The Government should note the cross-party opposition to the ticket off closure plans across the South East and Claire Perry should announce swiftly that the GTR plans are history.”

“The voice of staff and the travelling public has rung out loud and clear through the RMT campaign and the fight to scrap the whole programme of 83 ticket office downgrades and closures continues.”