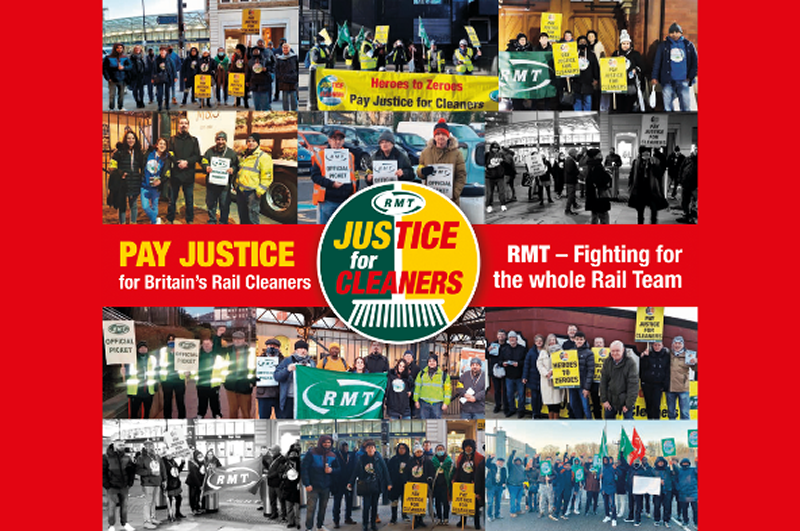 48-hour strike action next week in fight for pay justice.

Rail cleaners will continue their fight for pay justice next week with a 48-hour stoppage next week.

RMT members who keep trains and stations clean across London and the Southeast are campaigning for £15 an hour and to be made direct employees of the railways.

This will be the second bout of strike action starting Friday 11 March, affecting Thameslink, Southern and Great Northern, Southeastern, Eurostar and HS1 services.

Cleaners in London currently earn the London Living Wage and this action follows the biggest strike by cleaners in the history of the railways.

RMT general secretary Mick Lynch said:
"Churchill's treatment of cleaning staff who have risked their health and safety to work throughout the pandemic is a disgrace.

"Workers on low pay are much worse off now than 12 months ago and multimillion pound contractor Churchill has failed to recognise that.

"We will not stop campaigning or taking strike action until there is a just settlement and these outsourced workers are bought on to the railways as direct employees of the train operating companies."

As RMT showed recently, Workers on the National Minimum Wage and the Real Living Wage are more than £1,000 worse off now than 12 months ago as a result of soaring inflation, according to new research published by the RMT today. As RPI inflation reached 7.5% in December 2021 it meant that a worker on the National Minimum Wage would need £1,252 more a year to prevent a real terms pay cut while a worker on the Real Living Wage would need £1,395 more: https://www.rmt.org.uk/news/soaring-inflation-biting-into-low-paid-workers-wages/