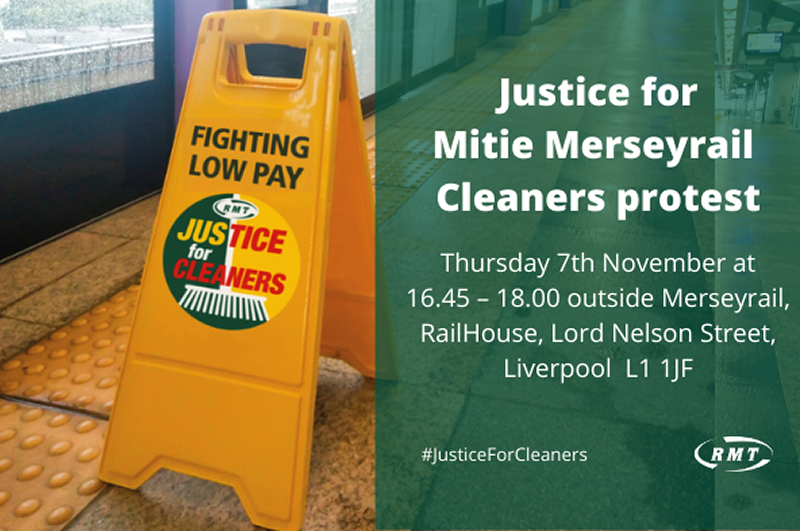 RAIL UNION RMT will be holding a demonstration in Liverpool this Thursday as part of its campaign for Justice for Mitie Merseyrail Cleaners which calls for a real living wage for this crucial group of transport workers.


RMT activists and supporters will make the case against poverty pay for a group of crucial staff who do some of the dirtiest jobs on our railways.


Merseyrail outsourced station cleaning and maintenance a number of years ago, the work is currently undertaken by Mitie Facilities Management, part of the Mitie Group plc. Mitie Group paid nearly £49 million to its shareholders in dividends in the last five years. But it won’t pay its cleaners the Real Living Wage.


In addition Merseyrail latest profit is £16M, and just £70k would fund the Real Living Wage just 0.004% of the profit level. A recent survey carried out by RMT of Mitie workers came back with 50% of respondents saying they struggled to make ends meet. The union believes that Merseyrail should not be allowing its contractors to pay poverty wages and that these workers should be bought back in-house.


“RMT’s campaign demanding a Real Living Wage for Mitie Cleaners is gaining momentum with political and public support continuing to roll in. We are determined to fight for pay and workplace justice, it is time for Mitie and Merseyrail to end this disgraceful exploitation and take urgent action.


“It is a scandal that the staff employed by outsourcing giant Mitie who clean stations for Merseyrail , doing some of the dirtiest work in the rail industry at all hours of the night and day, are struggling to make ends meet.


“A company that can pay nearly £49 million to its shareholders in dividends in the last five years for doing nothing can afford a tiny fraction of that to pay its cleaners a decent wage for the work that they do. Merseyrail needs to take urgent action to facilitate payment of the Real Living Wage.


“RMT welcomes the recent support of the Metro Mayor Steve Rotheram, who recognises that these cleaners should be paid at least the Real Living Wage, and we now call on Merseyrail and Mitie to sort this scandal out and end poverty pay.


“Mitie’s cleaners have had enough and are fighting for a Real Living Wage currently set at £9.00 an hour outside London. To do this, they need the help of all the passengers and I urge everyone to support our members and do all they can to make these wealthy companies do the right thing now and pay its workers a Real Living Wage. RMT repeats its call for the these workers to be brought back in house.”


Notes for Editors
For details of the Real Living Wage see here https://www.livingwage.org.uk/