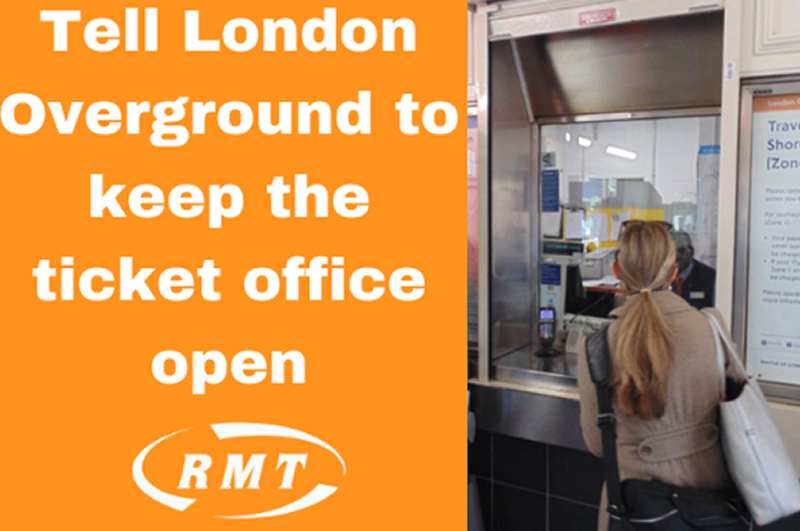 RAIL UNION RMT’s campaign to save 51 London Overground ticket offices has seen initial victory today after London Travelwatch was forced to postpone a post-consultation decision citing receipt over 7500 responses as “unprecedented and overwhelming”. While welcoming the news the union has made it clear that it is not the end of the matter and that the campaign will carry on until the closures are halted once and for all.

Due to the volume of responses London TravelWatch has deferred “a decision on this item until further analysis of the questionnaire and other correspondence used in the consultation has been completed.”

Earlier this month the union handed in postcards and a written submission to London TravelWatch alongside campaigners who handed in a petition, all protesting over the proposed closure of the ticket offices.

The formal consultation was launched by Arriva Rail London (ARL) and Transport for London (TfL).

•        Find it harder to obtain advice on tickets and fares

•        Would be frustrated that there were insufficient numbers of ticket machines

•        Who are disabled, elderly and vulnerable may be less confident using a ticket machine and may end up overspending or being deterred from travelling; and

•        Will experience a reduction in the number of staff.

“RMT welcomes the fact that London TravelWatch have been forced to recognise the strength of feeling on this matter due, in their own to words, to an ‘unprecedented and overwhelming’ response to the proposed closures of London Overground ticket offices. This is by no means the end of the matter but shows that the campaign is winning and we will now be stepping up the pressure to secure a total reversal of the closure plans.”

“In the light of today’s events I call on the Mayor of London Sadiq Khan to recognise the strength of feeling over the issue and oppose this retrograde plan for wholesale closures in the strongest possible terms. Ticket offices play a crucial role at train stations.

“This is just the latest attack on a properly staffed, safe, secure and accessible railway for all and RMT is determined to halt these plans in their tracks. We thank the travelling public for their huge support for this important campaign which has clearly had a big impact.”

London TravelWatch’s Board meeting agenda and recommendation to the Board can be found at http://www.londontravelwatch.org.uk/documents/get_lob?id=4627&age=&field=file