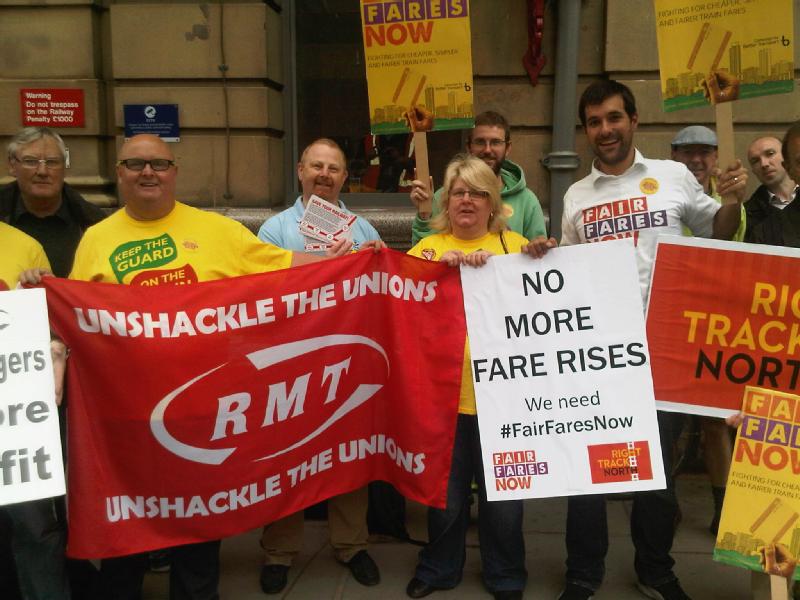 Protests this morning as part of the on-going RMT campaign against cuts to rail jobs and services, bound up in the Government’s proposals for the future of the Northern and Trans-Pennine Express franchises, have met with massive public support on the day that Northern axes a whole range of off-peak fares, with some prices more than doubling.

RMT launched a new post card campaign as part of this mornings protests, pointing out to passengers that the shock fare increases are a taste of what’s to come under the new Northern and Trans-Pennine Express franchises. The union has slammed the Government and Northern Rail for secretly colluding to axe the off-peak fares from today purely in the name of private profit.

RMT has blasted the moves as “a kick in the teeth for the travelling public and a taste of what’s around the corner under the new Northern and Trans-Pennine Express franchises if the community don’t stand alongside rail workers in the fight to stop the destruction of rail services right across the North”.

The new postcard, following on from the 10,000 cards collected in opposition to the plans under the franchise consultation, is being distributed across the region from today with the public urged to pressure MP’s to sign EDM 174, opposing the Northern and Trans-Pennine Express proposals, and calling for Councillors and Local Authorities to register their opposition.

The cards have been distributed at the following locations this morning and throughout this week:

DONCASTER
TUESDAY 9th September 2014 -
7am - 9am - Meet outside Doncaster Station

The fare increases, introduced today, mean that off-peak tickets can no longer be used during key times on weekday evenings.

Northern Rail have confirmed that the axing of the off-peak fares is simply about money and make a total nonsense of George Osborne's fraudulent claim yesterday that he is freezing fares. The truth is that his Government are in collusion with the private train companies to soak the travelling public for every penny they can get, as Northern themselves have confirmed in their explanation for the abolition of the off-peak fares:

“The changes are being made after the Department of Transport asked Northern to look at several options to generate additional revenue as part of its new franchise agreement.” – Northern Rail internal circular.

“The axing of off-peak fares is a savage kick in the teeth for people already struggling with the burden of low pay and austerity and the fact that it has been cooked up by the Department for Transport in collusion with the privatisation pirates from Northern Rail is a warning of what’s to come. Todays doubling of fares in the North makes a mockery of George Osborne's claim yesterday that he is freezing fares. Nothing could be further from the truth.

“RMT today launched the next phase of the fight to both inform the public and fight the savage cuts being lined up for these Northern rail franchises and to get MP’s signed up to EDM 174 opposing this carve-up. It is absolutely essential now that we keep up the pressure.”