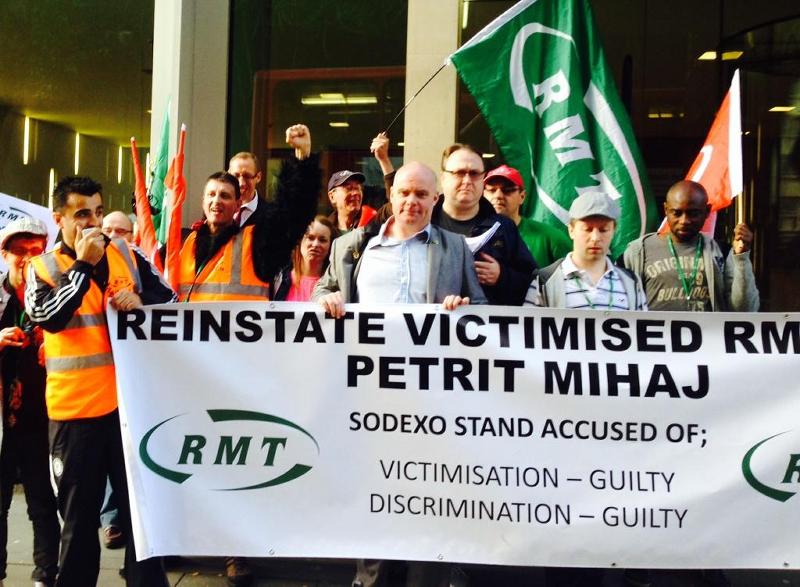 Transport union RMT will be organising a demonstration this May Day, International Workers’ Day, in support of sacked union organiser Petrit Mihaj. The protests will coincide with the official May Day march in London.

Following a high-profile campaign to organise the workforce, Petrit was subjected to disciplinary action and was eventually dismissed.

The union successfully brought tribunal claims on his behalf, establishing that Petrit had been unfairly dismissed for his trade union activities.

Despite the wins in the employment tribunal, union-busting Sodexo refused to reinstate or re-engage.

RMT has pointed out that Sodexo, which benefits from hundreds of millions of pounds worth of public contracts, has a long history of bullying, victimisation and discrimination and is notoriously anti-union.

Out of five RMT reps on this contract three have been sacked and two have faced disciplinary action. 10% of RMT members have brought claims against Sodexo to Employment Tribunals and 20% have unresolved grievances.

“It is scandalous that after more than a year of campaigning the union-busting, publicly-financed outfit Sodexo continue to deny justice to our representative Petrit Mihaj.

“On International Workers’ Day RMT will be taking Petrit’s case back out onto the streets of London and calling for support from across the trade union movement to end this outrage.”