TO ALL LONDON UNDERGROUND DRIVERS ON THE JUBILEE, CENTRAL, VICTORIA AND NORTHERN LINES

Members are congratulated for the massive 96.4% vote for action over the excessive level of track noise at a number of locations across the LUL network. The issue of high track noise has been a concern for at least the last 18 months and has been generating high levels of discomfort, stress and anxiety, as well as potentially affecting train operator’s hearing.

Following the ballot result your union met with London Underground and received a letter from the company outlining their approach to the issue. Unfortunately the remedial actions proposed by London Underground do not go far enough to mitigate the harm to our members and the travelling public. As a result of LUL’s total failure to adequately address this issue, the NEC has decided to call members to take industrial action as outlined below: -

All Driver members on the Jubilee, Central, Victoria and Northern Lines are instructed to take continuous industrial action short of a strike with effect from 00.01 hours Thursday 10th October 2019: -

• When in Pandrol Vanguard areas you are instructed to drive trains in manual mode at an appropriate reduced speed to mitigate the creation of excessive noise and to alleviate the distraction, discomfort and anxiety caused in the affected areas. A list of these locations which we have identified is below:

Please note this instruction and show your solidarity by acting in accordance with it. I urge you and your colleagues to stand united and protect both your own and the travelling public’s health and safety by fully supporting the industrial action called by your union.

SUPPORT THE ACTION
UNITY IS STRENGTH 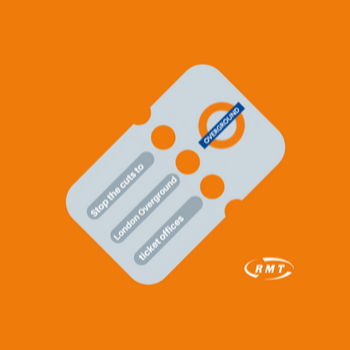