If you don’t vote - you could be even worse off

If you don’t vote - you could be even worse off

Your employer is planning the biggest attack on your pay and working conditions for 20 years, in the middle of a cost-of-living crisis.

Already, pay freezes mean wages are worth thousands of pounds less than they did a year ago.

The only thing standing in their way is your union and the threat of industrial action.

But you can only take action if at least 50% of all RMT members in your company vote. As explained in this video this is why the employers are hoping rail workers won’t bother to vote.

Whether you are stations, catering, ticket office, train crew, engineering or other grade, you need to be heard.

You need to use your vote and vote yes to strike action and yes to industrial action short of a strike.

If we fight, we can win.

And don’t believe the stories that the rail industry is short on cash.
Last year some rail companies sucked out a total of £350m from the industry and shuffled it off to their shareholders.

That’s the equivalent of rail workers employed by the train companies getting a 10% pay rise, matching the rate of price inflation.

So, the money is there, it’s just being siphoned off by the super-rich who won’t even notice the cost-of-living crisis instead of being used to help the heroes who kept the railways running through the pandemic.

Only your union can win a fairer settlement and we can only do that if you vote. Not voting is the same as telling your employer they can do what they want.

So, if you haven’t already done it, get that ballot paper in the post today.

If you have not got a ballot paper email defendjobschanges@rmt.org.uk.


RETURN YOUR BALLOT PAPER ASAP
VOTE YES FOR BOTH QUESTIONS! 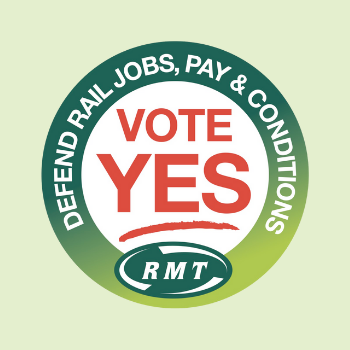