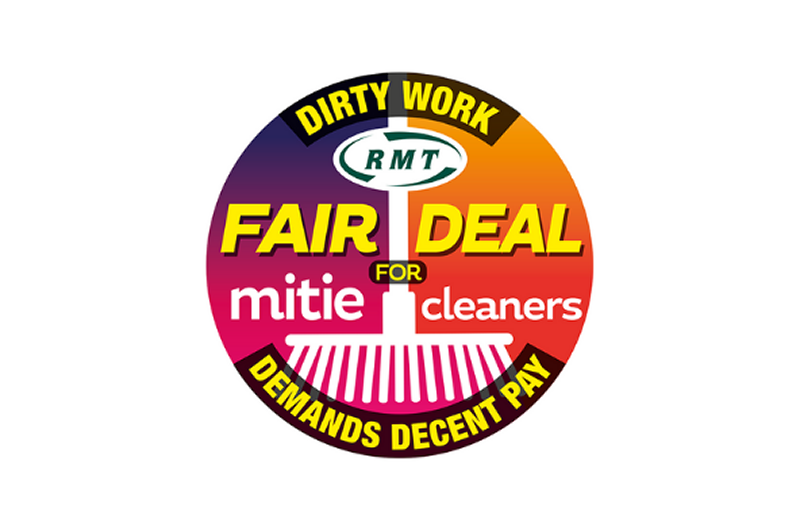 RMT Mitie station and accommodation cleaners on the Merseyrail Contract will be striking and demonstrating again tomorrow - Friday 13th August - in their ongoing campaign in support of pay and workplace justice.
‎
The demonstration, involving the cleaners and their supporters, will be outside Mitie and Merseyrail’s Liverpool Headquarters at Rail House, Lord Nelson Street, Liverpool L1 1JF at 8am on Friday 13th August.‎

The cleaners voted by a massive majority for action over the offfer of a pitiful increase in their poverty pay rates which would have still left them far short of the Real Living Wage and the absolute minimum of £10 an hour which RMT is campaigning for as recognition of these real hero's of the COVID pandemic who have worked throughout.

This key group of staff have already taken part in one day of rock-solid strike action last month and are determined to secure the justice that they rightly deserve.

The cleaners are also protesting the imposition of punitive rosters and attacks on holiday pay.

"‎These workers have been on the frontline throughout the pandemic, keeping the Merseyrail network clean and safe for passengers, yet they are being treated with disdain by their employer, who is more interested in keeping costs down than treating its workers fairly.

"Mitie cleaners on the Merseyrail contract are paid significantly below the Real Living Wage and far less than RMT’s minimum demand of £10 per hour. Yet, Mitie’s latest accounts boast of ‘good trading resilience through Covid-19’ and reveal that revenue was up nearly 20% on the year before.‎

"Even the paltry and unacceptable offer the company put on the table is now being withdrawn in what is effectively a punishment beating for these low paid workers for having the guts to fight for justice from this bullying and greedy outfit.

"We thank the people of Merseyside for their support for their cleaners in their fight for workplace justice and the union remains available for talks. "

The issues at the heart of the dispute are;

Pay and Conditions of Service 2020 & 2021: the pay awards for 2020 and 2021 remain outstanding and Mitie has offered what RMT and its members consider to be an unacceptable pay offer. The company has offered just 10p per hour from 1st July 2020, followed by 11p per hour from 1st July 2021. This offer would still leave these workers 29p per hour short of the current Real Living Wage (£9.50ph) and significantly short of the Union’s demand of at least £10ph.

Calculation of holiday pay: Mitie has withdrawn from a collective agreement reached with the RMT, and applicable from 1st April 2018, regarding the payment of average earnings during annual leave. Mitie has stated that this is due to legislation introduced by the Government which was applicable from April 2020 ‘The Employment Rights (Employment Particulars and Paid Annual Leave) Amendment Regulations 2018’. RMT has made clear to Mitie that the Union expects it to honour our collective agreement and that it can pay better than the minimum standard and still be compliant with legislation. Mitie’s response is that it only uses one system for calculating holiday pay and it is not prepared to use a separate calculation that would honour the collective agreement. This stance taken by Mitie therefore means that there are cleaners in Liverpool Combined Authority area that receive less than contractual hourly rates and in some cases the national minimum wage when taking annual leave.