MPs call on Mayor to end exploitation of Tube cleaners 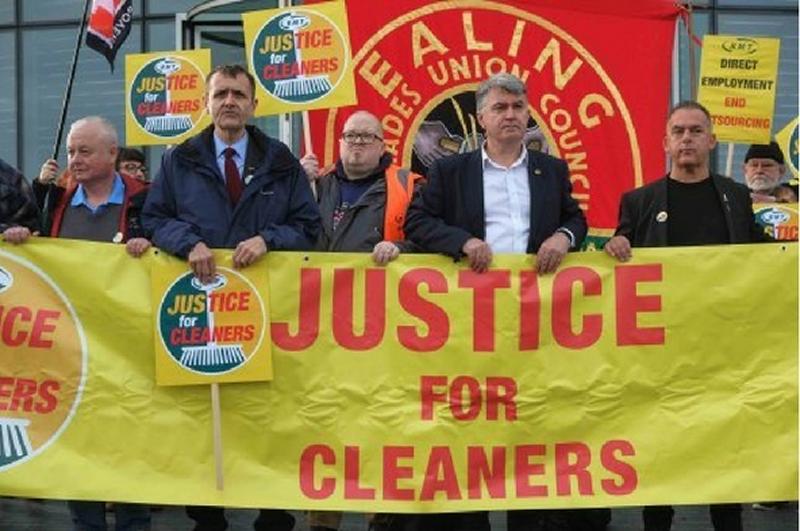 MPs call on London Mayor to end exploitation of Tube cleaners as RMT says treatment of workers “shames the capital.”

TUBE UNION RMT has welcomed a motion tabled in Parliament today by MPs calling on Transport for London, which is chaired by the London Mayor, to end the exploitation of Underground cleaners.

The MPs intervention came as RMT cleaners are due to demonstrate outside City Hall later today and RMT General Secretary Mick Cash said in an open letter to the London Mayor that the “continuation of such low workplace standards and conditions shame the capital.”

The MPs also say they are:

“further concerned by the decision of the new outsourced Tube cleaning contractor ABM to make employment conditions even worse by introducing an inferior sick pay scheme.”
The motion, which is also supported by MPs outside London, says;
“such a high profile world famous public service as the London Underground should be leading the way in providing decent working conditions for all its staff instead of exploiting vulnerable workers.”

RMT General Secretary Mick Cash said:
“The treatment of Tube cleaners shames the Capital. MPs are saying what the London Mayor should be saying – that it is unacceptable for a foreign global outsourcing outfit like ABM to be allowed to exploit 3000 London Tube cleaners in this way.

“Instead, the Mayor should be acting now to ensure these vulnerable but dedicated public servants receive the same basic conditions as other Tube staff.

“This should be a first step to ending the outsourcing of cleaning on the Tube and returning it to public ownership.”
ENDS

That this House is grateful to the 3,000 cleaners who keep the capital’s Underground network clear of obstructions and in a hygienic condition; is concerned that despite working in dirty and hazardous conditions, frequently through the night time and other unsocial hours, these hard working and often vulnerable public servants only receive the bare minimum statutory sick pay, pensions and holiday entitlement; is further concerned by the decision of the new outsourced Tube cleaning contractor ABM to make employment conditions even worse by introducing an inferior sick pay scheme;  believes that such a high profile world famous public service as the London Underground should be leading the way in providing decent working conditions for all its staff instead of exploiting vulnerable workers; calls for Transport for London to take all necessary steps in ensuring Tube cleaners are treated the same as other Tube staff in respect of their basic working conditions; and further calls for this outsourced cleaning work to be returned in-house as soon as practicable, so that Tube cleaning is part of the public sector alongside the rest of the London Underground.

I’m sure that we are all grateful to the 3,000 cleaners who frequently work nights keeping the capital’s ageing Underground transport network clear of obstructions and in as hygienic a condition as their shift and staffing levels permit.

As we now know, cleaners are working in a hazardous, artificially lit, microbe rich environment tackling bacteria and viruses capable of causing food poisoning, dysentery and meningitis both to themselves and to the travelling public.

It is fairly clear that many of these workers are vulnerable people and for some time, we have been concerned about the treatment of cleaners on the Tube, people who perform work have far worse basic terms and conditions than directly employed staff they work alongside.

During and resulting from a series of meetings and site visits, we made a number of proposals on how the position of cleaners on the Tube network could be improved. These proposals include:

- examination of the feasibility of bringing the workers in house (i.e. TfL directly employing these individuals);

- funded travel passes for cleaners, enabling – at minimal cost to TfL - these workers to travel freely around London (primarily to and from work). This is the same benefit to which many other public workers such as Police and directly employed TfL and LU staff are entitled;

- enhanced payments for cleaners working anti-social hours;
- improved sick pay arrangements: an end to punitive arrangements designed to prevent a worker from taking paid sick leave other than in the most extreme circumstances;

- improved pension arrangements: the current level of employer contribution is the minimum that is permitted and is not commensurate with the Mayor’s stated objectives on the type of fair and dignified work and retirement to which we all aspire;
- an end to cleaners being harassed over their immigration status/ nationality (i.e. once a cleaner has established their legal right, they should not be required to regularly re-prove it, such as every time the employer/ contract holder changes); and
- an end to the cycle of initiatives squeezing more and more labour out of staff, with work being performed at ever higher intensity with fewer and fewer task-performing individuals.

We are concerned at the award of the merged cleaning contract to ABM – the lowest bidder for the work – and that our above aspirations have not been incorporated into their plans. We are alarmed that ABM, to which cleaners have been TUPE transferred, has even begun dismantling the modest terms and conditions enhancements achieved at forerunner contractors, such as the sick pay scheme operated by the firm Vinci.

We believe that the continuation of such low workplace standards and conditions shame the capital and send a signal to other employers encouraging them in turn to exploit their own workers.

We think that you as chair of Transport for London, have a clear responsibility to assist in improving the position of cleaners on the Tube. At the very least you should be acting now to ensure these vulnerable, but dedicated public servants receive the same basic conditions as other Tube staff and review the contract with ABM so that the cleaning function is bought in-house as soon as possible.