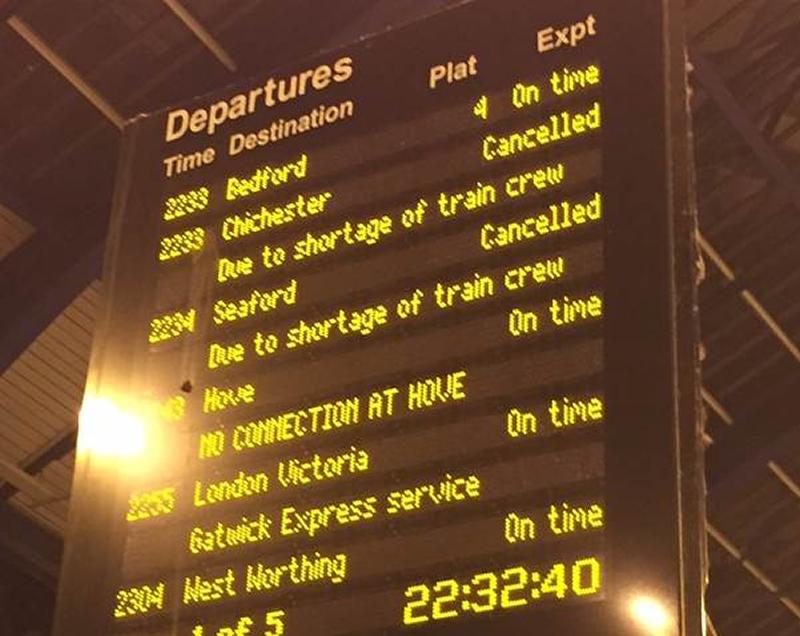 New RMT hotline exposes 33 examples of Govia Thameslink cancelling trains due to “staff shortage” or other excuses when a full crew of staff have been available.

In less than a week since rail union RMT set up a dedicated helpline for people to let us know about GTR ‘train cancellations’ we have definitive evidence of 33 trains cancelled where staff were available and ready to work but the trains were either cancelled because of engineering works, rolling stock failures or unavailability. The 1703 Eastbourne to Brighton service on Tuesday 14th was even announced as cancelled due to “staff shortages” as it left the station with a complete crew and full of passengers. On route Station staff said to the crew “we've been told your cancelled and I've been telling everyone”

A sample of other information sent to the RMT  include:

•         “17.57 London Bridge to Brighton yesterday was cancelled due to crew unavailable. When Control were asked which  member of crew was missing, they didn’t  say which one but they did say the stock was missing”

•         “On Monday 13.6.15 at Fratton station 2N19 1403 from Brighton to Portsmouth Harbour had terminated at Fratton due to late running. This train had left Brighton on time with a Driver and Conductor both booked to work it through to Portsmouth and back to Barnham. There was no further delay handing over at Barnham as the relief Conductor and Driver were both in place so the train was fully crewed throughout. The announcements at Fratton repeatedly stated that this train (2N26  1537 Fratton to Brighton) was delayed due to awaiting a member of train crew although it had been fully crewed throughout”

•         Monday 13th June “This evening this happened. Both conductor and driver was there! The conductor had been in the Breakroom since 20:30pm so no excuse. Driver was on platform waiting”. 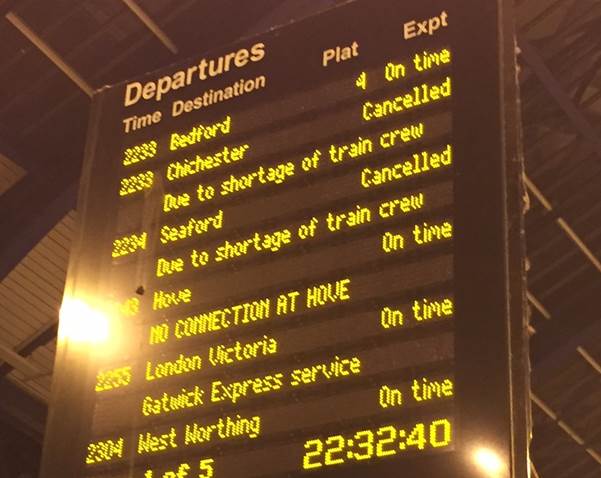 •         “On Sunday 12th June announcements at Victoria were saying that services from Redhill-Tonbridge are being cancelled due to a shortage of available train crew. Fact is Redhill is closed to due to planned engineering works so there is a rail replacement bus in operation . Nothing to do with train crew”

•         “ On Friday 8th June a Southern train broke down in Hastings causing the cancellation of the 0542 train from Hastings to Eastbourne, the cancellation of the 0702 train from Eastbourne to Hastings and the 0738 Hastings to Eastbourne. These were advertised on the Customer Information Service as cancelled due to conductor sickness. The conductor and driver were both there but their train had failed”

“RMT is sick and tired of Govia Thameslink, backed up by Tory transport minister Claire Perry, peddling a pack of lies and trying to blame staff for cancellations and disruption which are down to the company itself. This research blows apart that campaign of dirty tricks.

“There is no "unofficial action" on Southern. The staff shortages are down to gross mismanagement of staffing numbers, rosters and diagrams by the company on this basket case franchise and our hotline information now proves that services are being axed even when staff are available.

“Trying to lump the blame onto hard-working, frontline staff , who take the full force of passenger anger for cancellations and delays,  is cowardly and despicable behaviour by this failing‎, rip-off GTR outfit and their cheerleaders in the Government.

“Luckily, no one believes a word that comes out of this company and their dirty-tricks department. This is a franchise in meltdown, propped up by a Government bending the contract penalty rules to keep GTR afloat. Govia should be slung out immediately  with the publicly-owned Directly Operated Railways swung in to try and sort out this shambles.”

Is this the document that proves Southern banned overtime?

A letter from a senior Southern manager telling supervisors not to authorise rest day working appears to prove claims that staff shortages are being exacerbated by a ban on overtime. An angry member of staff approached Brighton and Hove News after Govia denied any overtime ban following claim