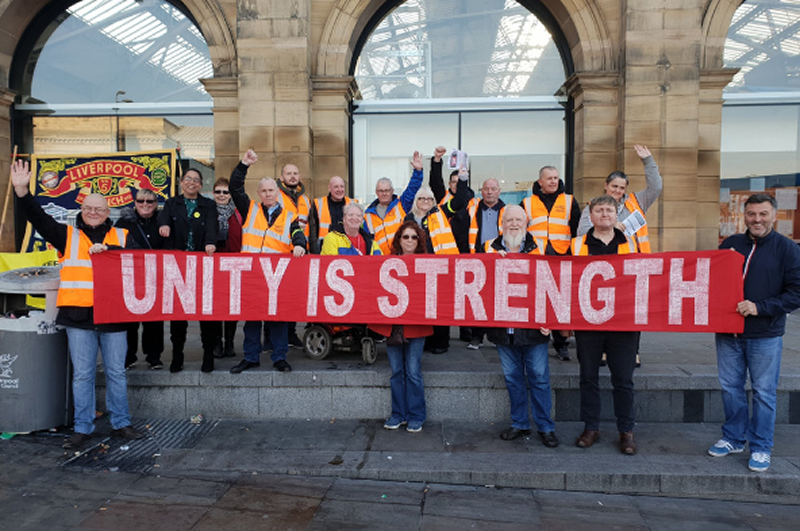 RAIL UNION RMT said that a 39th day of strike action over the threat to guards on Northern Rail trains goes ahead exactly as planned tomorrow after the company wrecked a golden opportunity to make progress in talks aimed at resolving the long-running dispute earlier this week.

RMT said it is “angry, frustrated and determined to carry on the fight for a safe, secure and accessible railway for all” after ACAS talks collapsed on Tuesday when the company made it clear they would not be addressing the unions clearly set out principles around the guarantee of a second safety-critical person on the train, with that member of staff having the full suite of competencies including at the crucial platform/train interface.

In addition, it also became clear during the aborted talks that despite grandstanding by the Government and the DfT no funding package is in place to underpin any commitment to a second member of staff on Northern Rail services making a mockery of statements issued only last week.

The action this weekend comes after the British Transport Police issued figures in the run up to the Christmas party season showing that violent incidents during the festive period have more than doubled over the past two years – exposing again the nonsense of getting rid of the safety-critical guard on Britain’s increasingly violent railways.

“RMT is angry, frustrated and determined to carry on the fight for a safe, secure and accessible railway for all after  Northern Rail squandered a golden opportunity to make progress towards a settlement in ACAS talks this week.

“Frankly, it is ludicrous that no thought has been given to funding the so-called “commitments” broadcast by the Department for Transport in relation to this dispute and instead of laying into the union at Prime Ministers Questions Theresa May should be forcing her ministers and the franchise holders to start talking seriously about the actual practicalities at the delivery end of the service.

"It has only been the resilience of RMT members and our supporters from the ‎travelling public, whose solidarity and determination have been instrumental in getting the focus of the dispute back on to the guarantee of a second person on the train. It is deeply disappointing that the company have failed this week to meet the union’s call to move the issues forwards. As a result the action continues as planned. ”