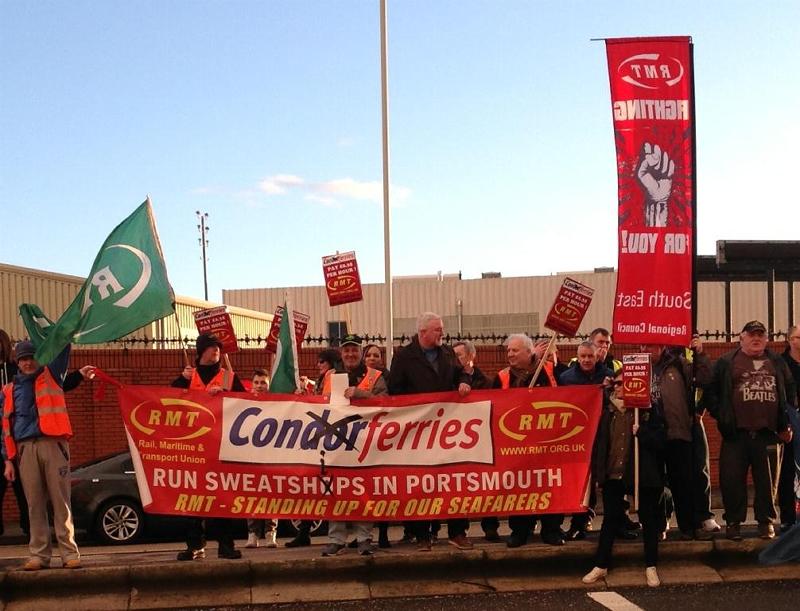 SHIPPING UNION RMT confirmed today that it is organising further protests on the south coast to raise awareness of the impact on shipping jobs of social dumping and the exploitation of overseas workers by the shipping companies.

The next days of protest against social dumping and exploitation by Condor Ferries will be at Portsmouth Continental Ferry Port, Wharf Road PO2 8RU on the following dates:

Condor continue to recruit Ukrainian seafarers on pay reported to be as low as £2.35 per hour to work on vessels to the Channel Islands from Portsmouth, Poole and Weymouth, and their latest accounts show a staggering 275% increase in pre-tax profits, entirely built on seafarers’ exploited labour. RMT says that this completely unacceptable crewing policy undermines UK employment and equality law, as well as damaging the maritime skills base through social dumping.
RMT has repeatedly warned that the coalition government’s so-called ‘light touch’ regulations in the Equality Act leave seafarers vulnerable to exploitation on grounds of nationality and increases the scandalous practice of social dumping with Government connivance.

Despite new legislation, trumpeted by the European Union, it has proved to be totally ineffective and massive scope remains for the shipping industry in the UK to continue paying lower wages to seafarers from non-EU countries, and to continue recruiting crew members on that basis. RMT will not stand idly by whilst companies continue to profit from paying seafarers poverty wages like the £2.35 an hour paid by Condor to Ukrainian ratings working on ferries to the Channel Islands and France.

“The modern day slavery on our ships of shame is a long-running scandal and it is clear that RMT’s campaigning is pushing the issue up the agenda. The super-exploitation of foreign nationals in the British shipping industry is a massive scandal that the political elite want to keep quiet. That’s no surprise as it’s their wealthy mates running the shipping companies who benefit from this scam that dodges normal employment regulations while the European Union turns a blind eye.

“Social dumping is a mechanism seized on by some of the most rotten employers in the book to try and batter down wages and conditions. RMT members and their supporters have the full support of the union for the two protests in Portsmouth which are just the latest phase in our on-going campaign.”