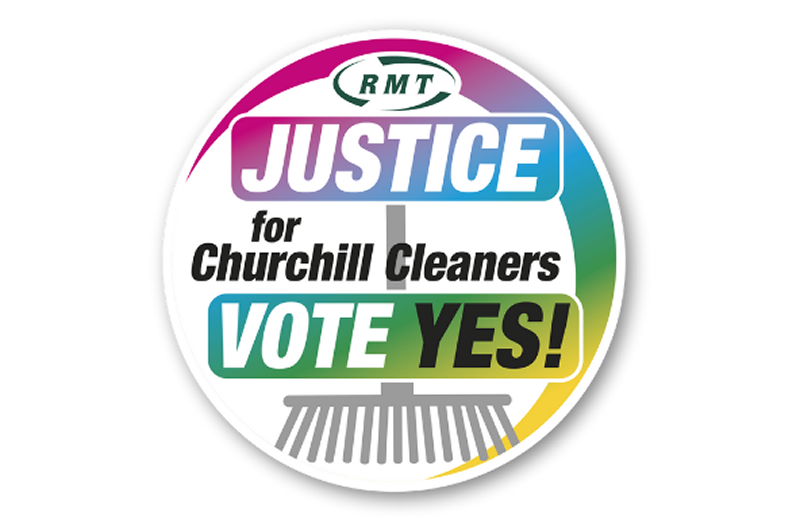 The historic strike ballot is the latest phase of a long-running campaign for pay justice by cleaners who have been described as heroes for working throughout the pandemic to ensure that trains running on Thameslink, Southern, Great Northern, Southeastern, High Speed 1 and Eurostar trains are safe for the public to use.

Many of the cleaners are paid only £8.91 per hour, the legal minimum wage, while others get only slightly more at £9.90 per hour. Churchill, the outsourcing company that employs these cleaners, has refused to table an acceptable offer in response to the cleaners’ claims for a pay rise, occupational sick pay and the same travel facilities given to other rail workers.

But research published today by RMT shows that the Churchill’s cleaning company paid a £12 million dividend last year that would be enough to fund a pay rise for all the cleaners that would lift their pay to £15 per hour. Even if Churchill’s Directors only used the £3.8 million personal dividend they paid to themselves, this would lift the cleaners pay to £11 per hour.

RMT General Secretary Mick Lynch said,
“This research shows a story of two pandemics. For the bosses of the cleaning companies, the good times keep rolling and the dividends keep flowing, but the heroic cleaners who put their lives on the line day in, day out during this crisis are expected to live on the margins, always worried about their budgets, constantly fearing to get ill because they won’t get paid.

“It’s time Churchill’s Directors paid more attention to the people who do their work and less to their private equity investors and personal fortunes. The value of company dividends would give cleaners £15 an hour and even if the directors only forsook their own dividends this would lift cleaners pay to £11 an hour.”

The ballot opens on 18 January and will close on 1st February and covers cleaners awarded by Govia Thameslink Railways, Southeastern railways, HS1 and Eurostar.

As RMT has revealed in a recent report, outsourcing companies get their profits from cutting cleaning costs to the bone, holding down pay and working conditions and cutting staffing numbers, which leads to exploitation of cleaning staff impacts on the quality of the service they can provide. In a recent survey of Churchill cleaners on these contracts: