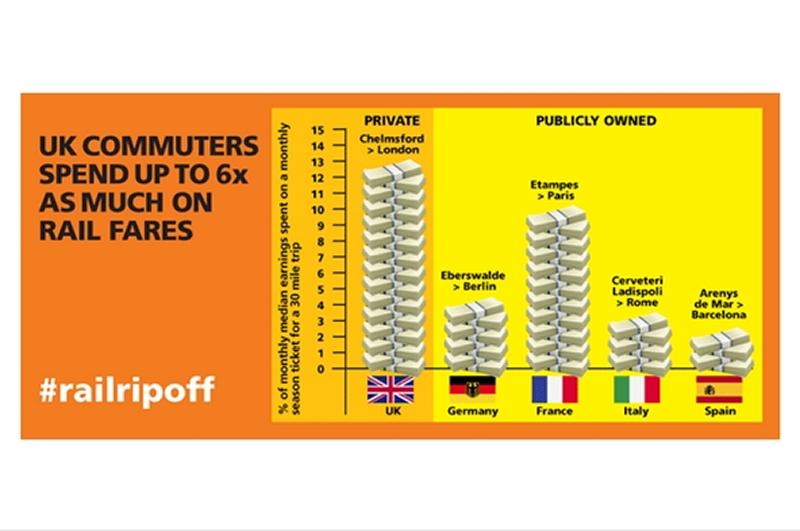 UK commuters spend up to 6 times as much of their salary on rail fares as other European passengers.

- Commuters to London pay £387 a month, compared with £61 in Paris or Rome
- Rail fares have shot up twice as much as wages and inflation over the past decade
- Campaigners point to “failed privatisation” as key driver of high fares

Rail commuters returning to work today (Tuesday) will face fresh fare increases, while spending up to six times as much of their salaries on rail fares as European passengers on publicly owned railways, new research by the Action for Rail campaign has revealed.

UK workers on average salaries will spend 14% of their income on a monthly season ticket from Luton to London (£387), or 11% from Liverpool to Manchester (£292).

By contrast, similar commutes would cost passengers only 2% of their incomes in France, 3% in Germany and Italy, and 4% in Spain.

The analysis also shows that rail fares have increased by 56% since 2006, more than double the change in average earnings (24%) and inflation (26%).

Action for Rail, a campaign by rail unions and the TUC, point to the UK’s privatised rail service as a key driver of costs. All other countries examined have largely publicly-owned rail services and lower costs for commuters.

The findings come as rail campaigners and workers plan to hold protests at over 100 stations around the country against fare rises and in support of public ownership. At London King’s Cross Station and Manchester Piccadilly Station, photo ops and demonstrations will take place at 8am on Tuesday 3 January.

“British commuters are forced to shell out far more on rail fares than others in Europe. Many will look with envy at the cheaper, publicly-owned services on the continent.

“Years of failed privatisation have left us with sky-high ticket prices, overcrowded trains, understaffed services and out-of-date infrastructure. Private train companies are milking the system, and the government is letting them get away with it.”

“British passengers are paying the highest fares in Europe to travel on rammed services while the private train companies are laughing all the way to the bank. Companies like Southern Rail and their French owners are siphoning off cash to subsidise rail services in Paris and beyond.”

"It's a national scandal and will only be stopped through public ownership of our railways."

- Action for Rail looked at the price of monthly season tickets on two UK routes and on comparable routes in four EU countries. They compared this with 2015 mean annual full-time earnings, taken from OECD statistics.
- Income and season ticket costs in Euro have been converted at a rate of 0.837, the Bank of England rate for 12 December 2016.
- Figures for rail fare increases over the past ten years are taken from the ONS CPI index for rail fares, using the 1% cap for 2016 figures. Figures on wage increase are based on nominal average weekly earnings, and on the OBR forecast for 2016.
- Action for Rail brings together the TUC, ASLEF, RMT, TSSA and Unite to work with passenger groups, rail campaigners and environmentalists to campaign against cuts to rail services and staffing and to promote the case for an integrated, national railway under public ownership. For more information about the actions please visitwww.actionforrail.org
- All TUC press releases can be found attuc.org.uk/media
- TUC Press Office on Twitter: @tucnews