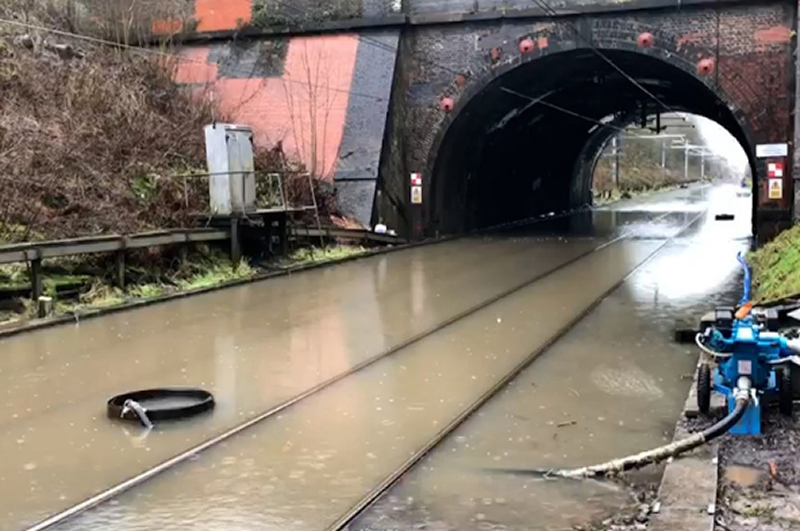 As storm Christoph batters the county RMT General Secretary Mick Cash has today written an urgent letter to the Chief Executive of Network Rail, Andrew Haines, expressing concern that the railway does not have sufficient resilience to adverse weather conditions and this could have terrifying consequences for passengers and workers.

The warning came after reports last week of the collapse of part of the north east rail bridge close to the site of Stonehaven train tragedy.

In the letter RMT demands to know whether a UK wide rail register has been fully developed which identifies what areas of the railway since the Stonehaven tragedy are at risk, including landslip or flooding risk, and what are the threats to passengers and workers.

The union is also seeking urgent answers as to whether enhanced inspection and maintenance regimes are in place to protect rail resilience and if safety and efficiency are being compromised by budgetary and resource constraints and the use of sub-contractors.

“Whilst rail workers have been battling in appalling conditions to keep rail services moving it is shocking that even after the Stonehaven tragedy Network Rail have not been able to identify with us what areas of the railway are at risk from adverse weather conditions and what steps are being taken to reduce that risk.

“Poor railway resilience and poor weather conditions are a toxic combination which could have terrifying consequences for passengers and workers. We are also deeply concerned that the necessary inspection and works regimes needed are being compromised by budget and resource constraints.

“Network Rail need to provide answers and action before we have another tragedy.”

Notes to editors
A full copy of the letter to Network Rail is below
Our Ref: HSR/2/1
20th January 2021
Andrew Haines
Chief Executive
Network Rail
By e-mail
Dear Andrew
LANDSLIPS AND FLOODING ON THE RAILWAY INFRASTRUCTURE
With reference to the above, I write to you following media reports last week of the collapse of part of the north east rail bridge close to the site of Stonehaven train tragedy.
I am becoming increasingly concerned that the railway does not have sufficient resilience to adverse weather conditions having an effect on the railway infrastructure including earthworks, structures and the track. Any failure of these could have terrifying consequences for passengers and workers.
You will be aware that as well as the tragedy at Stonehaven there have been a number of incidents across the country in recent years, so many that the Rail Accident Investigation Branch published a class report into the subject in 2014 and since then there have been a number of major incidents including Watford Tunnel and other incidents in Scotland.
My officials have already been raising concerns with Alex Hynes in Scotland but the response has provided nowhere near enough information or clarity and I need to ask you some of the same questions again.  You will also appreciate that the poor resilience of the rail Network is also a UK wide question. Indeed, there are so many unanswered questions that I am concerned that Network Rail don’t know what the scale of the problem is or, if they do, they are not being open about the risks. Moreover I fear budgetary and resource constraints are preventing you from being more transparent.
I would be grateful for your urgent response to the following questions;
I look forward to your urgent response.
Yours sincerely
Mick Cash
General Secretary