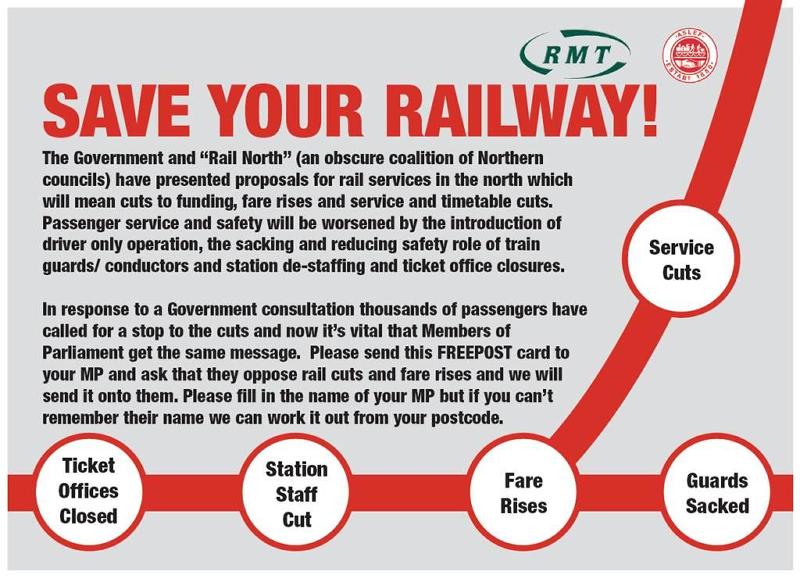 RAIL UNION RMT today confirmed the latest phase of the on-going campaign against cuts to rail jobs and services bound up in the Government’s proposals for the future of the Northern and Trans-Pennine Express franchises.

Last month RMT launched a new post card campaign pointing out to passengers that the shock abolition of off-peak fares is a taste of what’s to come under the new Northern and Trans-Pennine Express franchises. The union has slammed the Government and Northern Rail for secretly colluding to axe off-peak fares, along with jobs and key services, purely in the name of private profit.

The latest postcard drive, following on from the 10,000 cards collected in opposition to the plans under the franchise consultation, is being rolled-out  widely across the region with the public urged to pressure MP’s to sign EDM 174, opposing the Northern and Trans-Pennine Express proposals, and calling for Councillors and Local Authorities to register their opposition. Liverpool City Council have already come out decisively against the cuts with others set to follow.

"The fight to stop the outrageous carve up of jobs and services under the Northern and TPE franchise plans is gathering pace by the day and is sending out the clearest possible message to the Government and Rail North that they need to scrap this attack on transport services.

“Let’s not forget that the core of the Government’s future plans for Northern and TPE is to axe jobs, restrict services, throw the guards off the trains and jack up fares while capacity to meet surging rail demand in the area is left to stagnate. That attack on the fare-paying public has already begun with the abolition of off-peak fares and only an all-out and coordinated fight can stop the savage assault on rail in the North.

“RMT today launches the next phase of the fight to both inform the public and fight the savage cuts being lined up for these Northern rail franchises and to get MP’s signed up to EDM 174 opposing this carve-up. It is absolutely essential now that we keep up the pressure.”