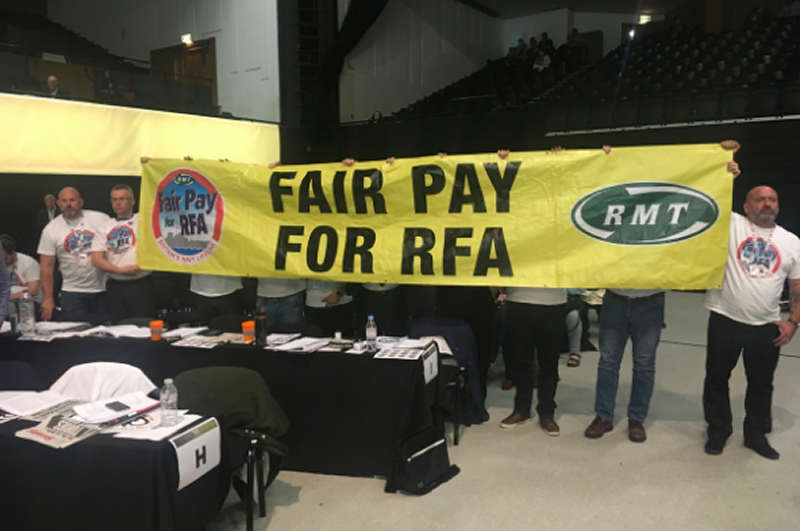 Seafarer union RMT today took the fight for pay justice for staff at the Royal Fleet Auxiliary to the TUC Congress in Brighton, demanding a fair deal for workers ‎supplying Royal Navy vessels in trouble spots all around the globe.

RFA staff have been excluded from the inflation-proofing of wages that has been offered to other forces personnel and instead have been confronted by an imposed award that would mean a real terms cut in standards of living for brave men and women serving in war zones and hotspots including the supply chain to ships currently deployed in the Strait of Hormuz.

RFA pay has fallen 21% behind inflation over the past decade with associated attacks on pensions and redundancy rights. Staff who have put their lives on the line from the Falklands to the Gulf have been repeatedly treated with contempt by the Government.

Over 700 RMT members have been engaged in a campaign of industrial action since ‎early July in their pay fight but still the employers refuse to budge.

The RMT backed motion to the TUC, addressed by President Michelle Rogers, was carried unanimously and commits the whole trade union movement to backing the "Fair Pay For RFA" campaign.

RMT General Secretary Mick Cash said;
"RMT welcomes the unanimous support from the trade union movement for the fight for pay justice that is being waged by our Royal Fleet Auxiliary members.

"These brave men and women, who put their lives on the line supplying Royal Navy vessels around the world, have been hammered year after year on pay and all we are calling for is fairness and equality that recognises their vital role.

" Parliament may have been suspended but the Fair Pay For RFA fight goes on."
Ends.