RMT calls for immediate halt of plans to axe guards 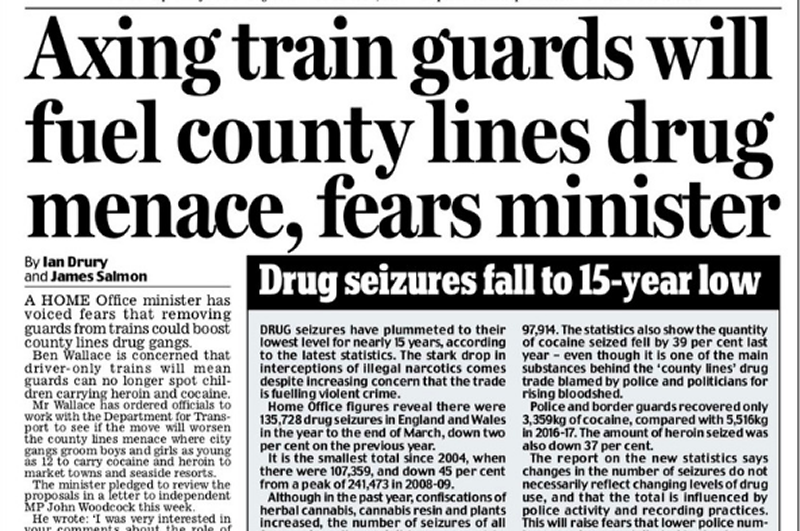 RMT calls for immediate halt and reversal of plans to axe guards from trains as Government minister admits they are front line in the fight against crime.

RAIL UNION RMT today demanded an immediate halt and reversal of plans to axe guards from trains as a Government minister admitted in a letter that guards are in the front line in the fight against crime and specifically the battle against county lines drug gangs.

In a letter from Organised Crime Minister Ben Wallace to MP John Woodcock the minister openly admits that driver-only trains would undermine the fight against ‘county lines’ gangs because guards can help spot youngsters who are being used as drug mules.

The ministerial letter, an open admission for the first time by the Government of the dangers of Driver Only Operation, says;

"I was very interested in your comments about the role of public transport in facilitating county lines, particularly where rail franchises are removing guards from trains.

‎"Home Office officials will liaise with the Department of Transport to consider this issue further and to determine whether there is any additional action that we can take in this space, working alongside other partners including the British Transport Police (BTP).

"Officials in our Strategic Communications team have also developed a range of communications materials which aim to raise awareness of the signs to spot that a young person could be at risk of being exploited by county lines gangs. They have been working with organisations in the transport sector, such as the Confederation of Passenger Transport, BTP and the Rail Delivery Group to promote these materials to the sector."

The development comes on the eve of the latest wave of action in defence of the guards on Northern Rail.

"The guards on our trains are the eyes and ears of the rail service and play a crucial role in combating crime whether that's assaults, sexual harassment or spotting those who may be in a vulnerable position like young kids being used ‎as mules by county lines drug gangs.

"This ministerial letter, admitting that the axing ‎of guards has huge implications for the fight against crime and the drug gangs, backs up everything RMT has been saying about the dangers of Driver Only Operation."

"No Government serious about tackling crime would give the green light to throwing guards off our trains. The policy should be halted immediately."