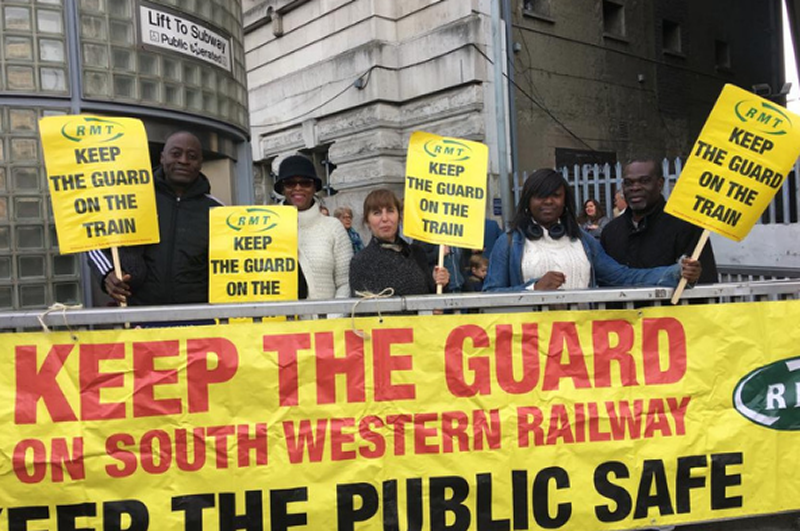 RMT action in South Western Railway strike remains rock solid this morning as union calls on company to break the deadlock and agree to talks.

On the second of five days of action in the latest phase of strikes on South Western Railway over the threat to axe guards and roll out driver only operation rail union RMT said that members remain absolutely rock solid and called on the company to agree to talks to break the current deadlock.

“On the second of the five days of strikes in this current phase of action on South Western Railway RMT members remain rock solid and determined this morning in the fight to put public safety before private profit.

“There is only one way to break the deadlock in this dispute and that is through South Western Railway agreeing to RMT's call for talks and sitting down with us to negotiate around the guard guarantee which matches the widespread best practice in the industry.

“We have said from the start that this dispute is all about safety and while SWR might think it’s acceptable to play fast and loose with passenger safety, security and access but RMT members, who have stood firm throughout this dispute from day one, will not accept a dilution of the safety regime on the railway.

“There's a simple solution to ‎this dispute and it means SWR stop playing with words, stop trying to create loopholes that open the door to widespread driver only operation and negotiate the guard guarantee that reflects the safety values of the agreements RMT has pinned down in other parts of the rail industry.

"RMT thanks the public for their support and understanding throughout this dispute which is simply about putting safety, security and access on South Western Railway before the private profits of the train company."