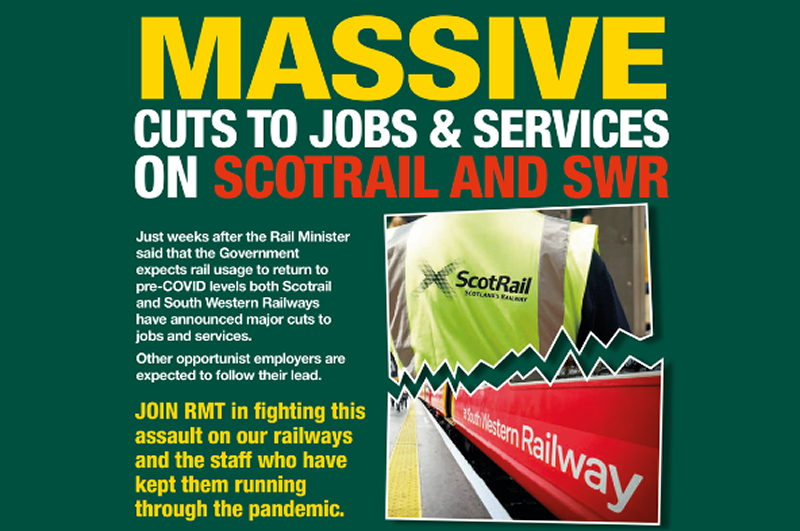 RAIL UNION RMT said today that is stepping up the campaign against a cynical and opportunist wave of post-COVID cuts to jobs and services on Britain's railways – warning that savage proposals being drawn up by both Scotrail and South Western Railway are set to be mirrored across the network.

The cuts plans already being lined up, which would decimate services and staffing levels, fly in the face of statements from Government ministers just weeks ago that they expect rail passenger usage to return to pre-COVID levels.

“It is crystal clear that the planned cutbacks on both Scotrail and South Western Railway are just the tip of the iceberg as cynical employers use the cloak of COVID to smuggle through the decimation of jobs and services on Britain's railways.

“Not only do these planned cuts fly in the face of the Government's own statements on future rail usage they also a mockery of their green agenda as they will force more cars onto the road at the expense of environmentally-friendly rail travel.

“RMT will not sit back while this carve up of the rail network is cooked up in company boardrooms. We will be stepping up our campaigning and the union has moved onto an industrial war-footing as we recognise exactly what is at stake.

“If it means national industrial action on the railways to stop this carnage we are more than ready for that.”