RMT campaigning over axing of guards on Northern Rail 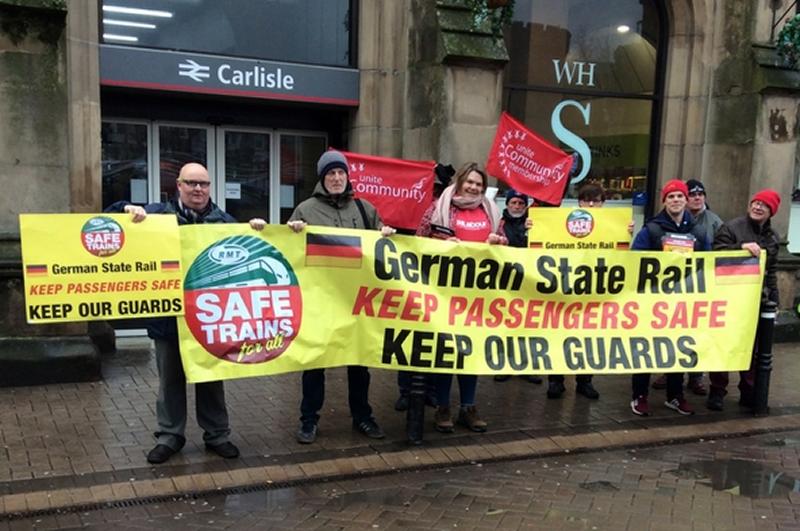 RMT members to hold week of protest at stations across the north over threats to safety, service and accessibility.

This weekend marked the second anniverary of Arriva taking over the Northern Rail franchise.

Instead of the much heralded promises of improvement in services over the past two years the franchise has been beset by problems. At the same time it’s German state rail owners stand to profit while passengers suffer.

RMT is warning passenger services, safety and accessibly are set to get even worse if Northern get away with their plans to introduce Driver Only Operation and remove guards from trains. RMT members are to hold a week of protest at stations across the north starting today, 3rd April, to highlight the dangers of driver only trains.

“It’s bad enough that Northern passengers have not seen any sign of the promised improvements but it is unforgivable that Northern are about to make matters worse by getting rid of guards who do so much to assist passenger service, safety and accessibility.

“What is unbelievable is that because Northern is owned by German State railways the German railway will profit and get better on the back of these cuts to northern services and jobs.  That is a scandal.

“RMT members will be protesting at stations across the north this week, kicking off today, to highlight our concerns about the attack on jobs and safety by the German state owned northern franchise and we will be calling on the Secretary of State for Transport to stop supporting these plans and reverse them.”

RMT will be leafleting stations across the Northern Network from Tuesday 3rd April 2018 to Friday 6th April 2018.

To be arranged - Workington and possibly Ulverston

To be arranged - Doncaster, York, Harrogate, Huddersfield, Skipton and Hull.

To be arranged - Middlesbrough