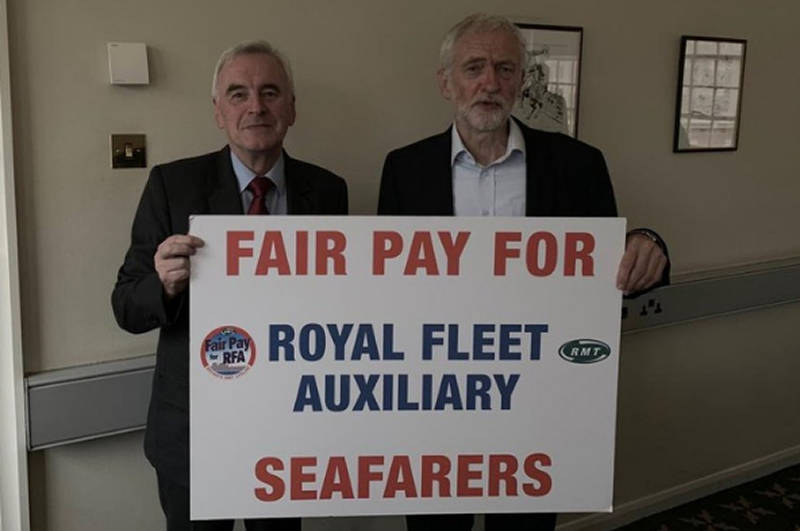 Maritime union RMT confirmed today that it will be holding a parliamentary demonstration next week in support of a programme of industrial action involving nearly 700 workers at the Royal Fleet Auxiliary – the Royal Navy supply lifeline – in a fight for pay justice.

The demonstration will be held with RFA members outside Parliament on Wednesday 17th July, 12.30pm opposite Old Palace Yard SW1A 2BE

Later that day, RMT’s Parliamentary Group has also organised a drop-in briefing for MPs on the union’s “Fair Pay for RFA” campaign.

Despite repeated efforts by the union to reach a negotiated solution the employer has instead opted to impose a 1.5% increase, further undermining the living standards of a crucial group of workers who have seen service in major trouble spots, including the Falklands and the Gulf, at huge personal risk. RMT has warned that it is the dead hand of the Government behind the imposed pay cap – effectively preventing the employer from negotiating a fair and just settlement that protects RFA members standards of living.

In a ballot of members over the derisory 1.5% offer there was an overwhelming vote for action signalling the strength of feeling amongst the workforce and opening the way for the on-going campaign of industrial action .

With effect from 00:01 hours on Tuesday 2nd July 2019, until further notice, RFA members have been instructed:-
• Not to come back early from End of Voyage Leave , to join at the correct time and not to volunteer to extend if asked by the company.
• Only to conduct Maritime and Coastguard Agency mandatory safety drills and not to take part in prism serials or any RFA specific drills. This would include any serials undertaken by FOST staff
• Work contracted hours, not to carry out any work over and above contracted hours unless responding to emergencies.
• Catering grade members are not to prepare any food for any social functions i.e. Cocktail parties and social gatherings for ships coming out of refits and stewards should refuse to work these social functions.
• Not to carry out duties that would have been carried out by members of other departments taking industrial action.

Members who are participating in humanitarian and/or disaster relief operations or are reacting to a military conflict situation will be exempt from the above industrial action.

“RMT welcomes the fantastic levels of political and public support for our “Fair Pay For RFA” campaign but we need to step up the pressure on both the employer and the Government. The demonstration next week at the House of Commons will give us a chance to do just that.

“It is disgraceful that our Royal Fleet Auxiliary members, staff delivering the supplies life-line to the Royal Navy that is crucial to our national safety and security, have had a derisory pay increase imposed on them which doesn’t even keep pace with the cost of living. That amounts to a pay cut in real terms and is wholly unacceptable and that is why we have been forced to move to a programme of industrial action.

“RMT will not stand by while RFA staff are denied basic pay justice. We remain available for genuine and meaningful talks.”

Notes to Editors
1. EDM 2365 in support of the Fair Pay for RFA campaign has attracted significant and growing cross-party support https://edm.parliament.uk/early-day-motion/52894/fair-pay-for-the-royal-fleet-auxiliarys-merchant-seafarers
2. RMT members, including those in the RFA will assemble 12.30pm opposite Old Palace Yard SW1A 2BE and will be present until 1.45pm.