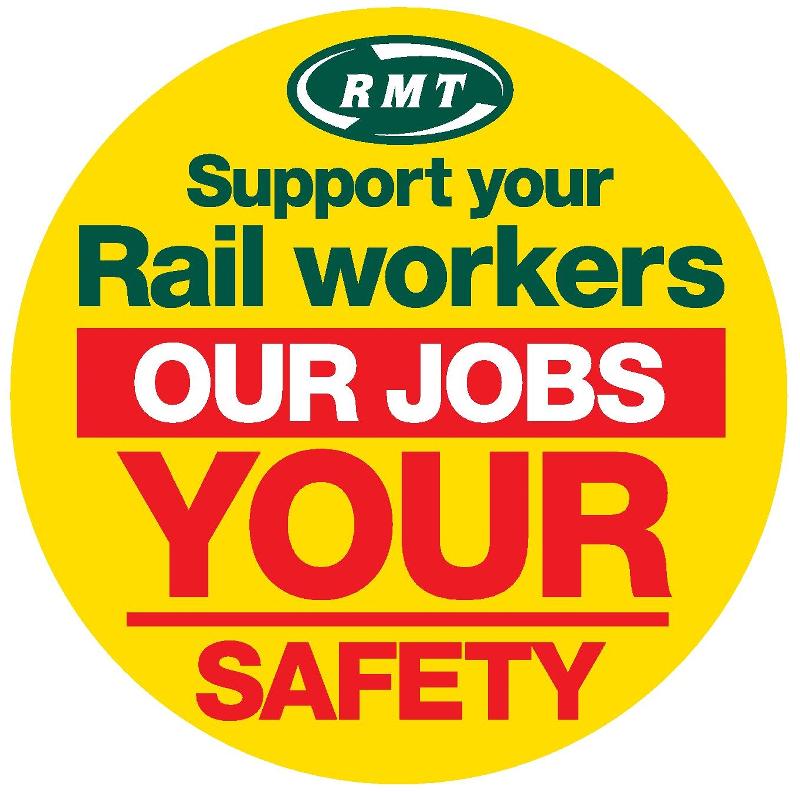 The largest rail union, RMT, today confirmed that members will be taking strike action and action short of a strike from Monday 25th May in the current dispute over pay and jobs at Network Rail. The impact of the action will build up over the Monday the 25th and will be in full effect by the start of the Tuesday, the 26th May.

NR members voted this week by 80% for strike action on a 60% turn out and by 92% for action short of strike action.

RMT has rejected the latest NR pay proposals as falling well short of what is required to maintain the living standards, the job security and the working conditions for nearly 16,000 staff across NR operations and maintenance.‎

The current pay package proposals which RMT has put into dispute are summarised as follows.

“Our members have decisively rejected the pay package offered by Network Rail and the failure of the company to make any moves whatsoever in light of the overwhelming vote in the ballot has left us with no option but to move to a rolling programme of industrial action.

"We have a massive mandate for action which shows the anger of safety-critical staff across the rail network at attacks on their standards of living and their job security. It is appalling that NR are refusing point blank to take this dispute seriously, to understand the deep-seated grievance felt by their staff and to come forward with a renewed offer which protects pay, jobs and safety.

“We have made it clear that as far as RMT Is concerned the one off, non-consolidated, lump-sum payment this year is wholly inadequate and fails to recognise the massive pressures staff are working under to keep services running safely at a time when the company is generating profits of £1 billion. It is our members battling to keep Britain moving around the clock and they deserve a fair share from Network Rail for their incredible efforts.

“In addition, we are extremely concerned that the “No Compulsory Redundancy” commitment only applies to the first two years of the four year deal.

“RMT is in no doubt that this leaves Operations and Maintenance members extremely vulnerable, especially with the continued development of Rail Operating Centres and the on-going cuts programme at Network Rail.

“Our rail staff deserve a fair reward for the high-pressure, safety-critical work that they undertake day and night and the last thing that we need is a demoralised, burnt-out workforce living in fear for their futures and the message has come back loud and clear that that is exactly how they feel about the current offer from Network Rail.

“RMT remains available for talks and we hope that the company will appreciate the anger amongst staff at the current offer on pay and conditions from Network Rail and that they will agree to our call to come back to the table with an improved package. We expect rock solid support for this action and will be taking a new campaign to the public under the banner "OUR JOBS - YOUR SAFETY" as we build support for the fight to stop this attack on a workforce ‎whose core role is to deliver a safe railway to the British people."