RMT day of action to #BringBackTheBuffet on GWR 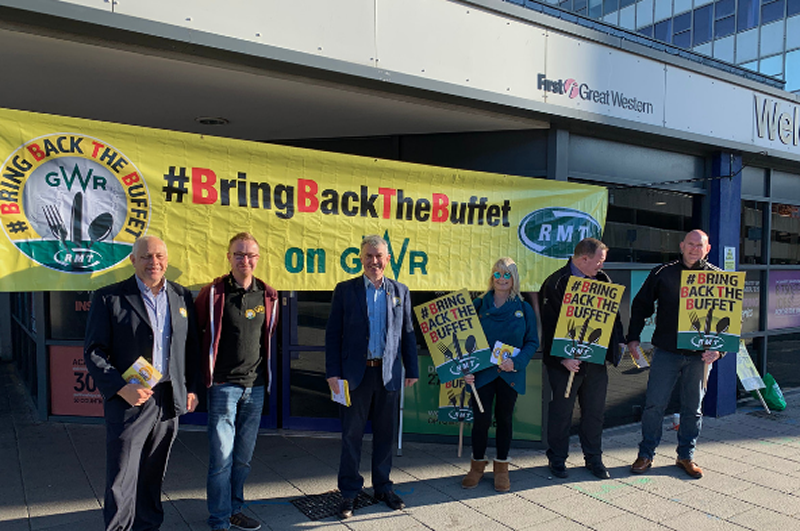 On the morning that rail union RMT is holding #BringBackTheBuffet events in Swansea, Plymouth and London the union has released research citing examples of how the axing of the buffet service has impacted on GWR services and showing the 95% of staff support it’s reintroduction.

With a total disregard for the passenger experience, Great Western Railway (GWR) has removed the buffet car from all of its new Intercity Express Trains, despite the fact that they serve long distance routes such as London to Paddington.

RMT warned GWR and the Government that removing the buffet would lead to a deterioration in the passenger experience, yet GWR ignored these warnings and ploughed ahead. The research issued today shows that RMT’s concerns have now been proven to be true.

A survey of RMT members working for GWR is overwhelmingly clear that the buffet must be reinstated without delay. Key findings include:

·         Similarly, 95% think the removal of the buffet has had a negative impact on the passenger experience

The following comments are reflective of the strength of feeling amongst GWR workers about this detrimental change:

“The passengers deserve a ‘great experience’ when travelling with GWR, the removal of the buffet car is not great for the overall experience.”

“Every regular passenger to whom I’ve spoken about the buffets believes it’s a disaster that they were ever taken off. Revenue has plummeted, but first and foremost, safety has suffered”

“Passengers are constantly telling us how they miss the buffet car”

“I believe it’s so much more than a buffet car. It’s an information point. Safe place for people who are unsure of travelling”

“The standard trolley is not fit for purpose. It is detrimental to the welfare and health of staff. The weight alone is ridiculous and many people have, back, neck, shoulder, hip and knee problems’

‘Our job used to be so enjoyable but now it’s very stressful and unrewarding, as you feel like you have failed before you have even started’.

More than 1500 people have already signed an online petition calling for the buffet to be reinstated, demonstrating the strength of feeling amongst the public. The following comment from a passenger highlights the vital service played by the buffet:

“The trolley service is sporadic and has limited stock. With two hungry children and one with a food intolerance, I couldn’t satisfy their needs as I had no prior notification of the change in catering facilities”

RMT is holding action days on Monday 13th May at Plymouth, Swansea and Paddington stations from 7am – 9am to campaign with GWR passengers for the company to #BringBackTheBuffet

“It is about time Great Western Railway started listening to the staff working at the sharp end of their services and supported the return of the buffet car on their trains.

“The axing of the buffet car on Great Western Railway was a cash-led move that was all about maximising profits at the expense of the traveller. RMT’s Bring Back The Buffet campaign is setting out to right that wrong and the events this morning in Swansea, Plymouth and London are about building public support for our demands.

"RMT catering members are an integral part of the rail team and they deserve respect and support. It is those members who face the backlash when the catering services are letting down the passenger.

"For too long catering services on the railway have been seen as a soft touch for cuts. No longer. RMT's #BringBackTheBuffet campaign will put catering on the railway centre stage, where it belongs."

The online petition is available at https://you.38degrees.org.uk/petitions/great-western-railway-bring-back-the-buffet