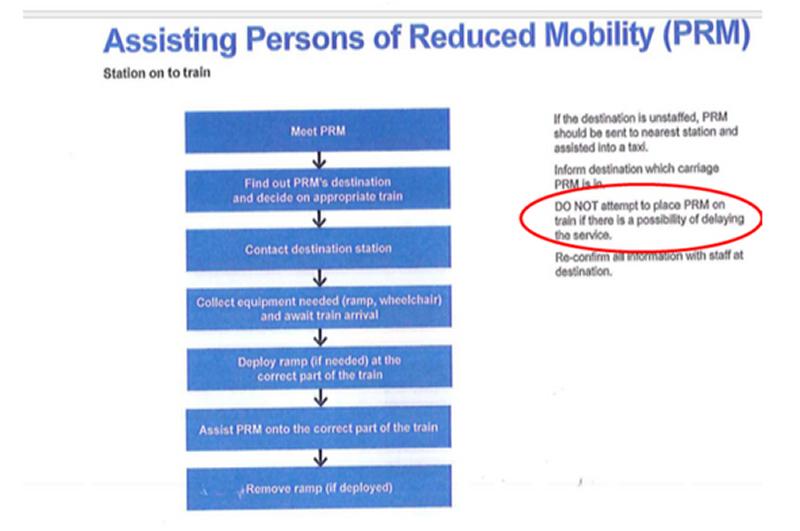 RMT demands end to attack on guards as Ministers forced to admit GTR are discriminating against disabled passengers.

RAIL UNION RMT is demanding an end to the attack on guards on Govia Thameslink Railway (GTR) as Ministers have been forced to admit that the company is discriminating against disabled passengers.

Nusrat Ghani MP, Parliamentary Under-Secretary (Department for Transport) has today claimed that DfT officials have met with GTR to discuss the leaflet in which the company told staff: “DO NOT attempt to place PRM (Persons of Reduced Mobility) on train if there is a possibility of delaying the service.”

Rachel Maskell MP said that GTR instructs staff “to move from the train as quickly as possible someone having a seizure”. She added that this is not only completely wrong medical advice but, in addition to the instruction not to place persons of reduced mobility on train, if there is a possibility of delaying the service, it is also discriminatory against disabled people.

She asked “why hasn’t the Minister intervened and why has he allowed GTR to get away with this direct disability discrimination?"

The admission of total failure by the Government to enforce equality of access regulations on their private contractors was backed up today in a statement by their spokesperson Lord Young of Cookham in the Lords.

“ It was RMT who blew the whistle on GTR last week over their disgusting attitude to disabled people and the Government are right to be embarrassed by this latest scandal on Britain's privatised railways. They have been caught bang to rights on a basket case franchise they have direct control over.

“However, the union has no intention of letting ministers off the hook despite the mealy-mouthed statements today. GTR are not fit to run a bath let alone a railway. They should be stripped of the franchise. The only way to guarantee access to our trains is to guarantee there's a guard on board. Anything else is a cop out."