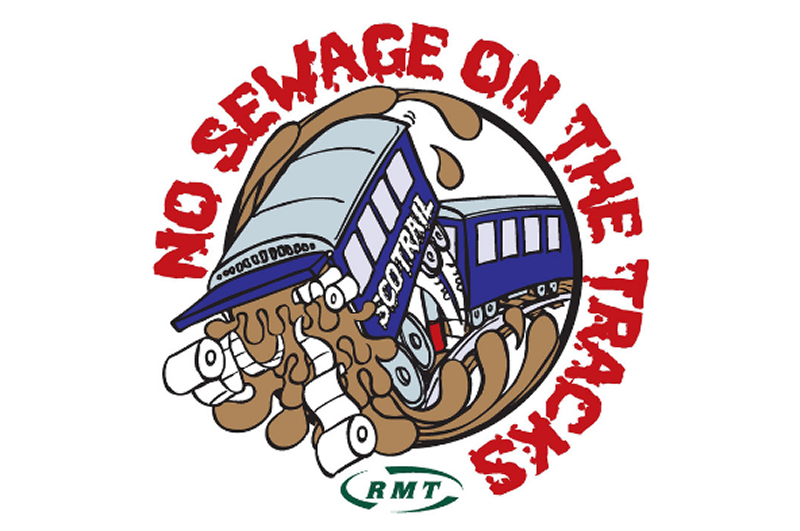 Rail union RMT today wrote to both Scotrail and the Scottish Government demanding urgent action after it emerged that the company are in flagrant breach of a clear agreement with the union to halt once and for all the dumping of human waste on Scotland’s railways by December 2017.

The scandal emerged after it was confirmed that Abellio Scotrail are introducing a number of vintage High Speed Train’s onto the rail network in Scotland. These trains are forty years old and due to their refurbishment programme being some months behind schedule, and the fact they are returning a number of trains back to other train operators from December, the human waste onto the track will become an issue at Scotrail again as nine out of ten of the trains are not fitted with Controlled Emission Tanks.

This is a total breach of a well-publicised agreement with the union that the practice of dumping human excrement on the tracks, at great risk to rail workers and others coming into contact with the disgusting practice, would end in December 2017.

Copies of the RMT letters to both Alex Hynes at Scotrail and the Transport Secretary Michael Matheson are attached below and RMT’s executive will be discussing the issue, and any responses, this week when the union will also look at a campaign of action to halt the practice once and for all if the company and the politicians refuse to act.

“Our members are rightly appalled that Scotrail have sought to rip-up a clear agreement to end the filthy and disgusting practice of dumping human excrement on Scotland’s railways. This disgraceful and retrograde step must be halted now and the union will take whatever action is required to hold Scotrail to their agreement with the union.

“One minute Scotrail are bragging about their aim to operate the most modern railway in the world and the next they are back to spraying track workers with human waste. We want this scandal to be brought to a halt once and for all and our members will not be the ones left to pay the price for managerial incompetence and operational delays on the fleet management that are wholly down to the company.”

Effluent on the tracks

I write to register RMT’s strong objection to Abellio ScotRail’s plan to introduce High Speed Train (HST) units on to Scotland’s railway network without controlled emission tanks (CETs) to prevent effluent discharge on to the track.

I note from RMT Regional Organiser Gordon Martin’s meeting with ScotRail’s Engineering Director on 26 October that ten HSTs will be in service by December, with only one fitted with CET tanks. This is completely unacceptable. My members should never have to work with the serious health risks associated with effluent discharge from passing trains, especially where we have secured previous commitments from Abellio ScotRail and Transport Scotland that this practice would end on the ScotRail fleet from December 2017.

To my members and the wider public this failure looks very much as though Abellio ScotRail has reached another milestone in how not to run Scotland’s railways.

This matter has to be resolved before the end of November and I look forward to your early reply on this urgent matter.

Effluent on the tracks

I write on the above matter in light of Abellio ScotRail’s plans to introduce High Speed Train (HST) units on to Scotland’s railway network without controlled emission tanks (CETs) to prevent effluent discharge on to the track.

I note from my union’s recent meeting with ScotRail management and your recent written answers to MSPs that a number of the twenty HST units currently being refurbished by Wabtec are likely to come into operation on Scotland’s railways without CETs in place to ensure that this ageing rolling stock does not discharge human sewage directly onto the track. I understand that nine out of the ten HST's due to come into operation on Abellio ScotRail routes from December will not be fitted with CETs.

Not only does the return of this hazardous practice compromise the terms of your Franchise Agreement with Abellio ScotRail, it breaks the commitment given by the Scottish Government to the STUC and rail unions in 2016, namely that all trains in the ScotRail fleet would be fitted with CETs by December 2017, in order to end the discharge of effluent from ScotRail rolling stock onto the track.

The Scottish Government must honour the previous commitment by ensuring that no HST is brought into operation by Abellio Scotrail without CETs fitted and functioning.

This unacceptable backward step once again demonstrates the need to scrap the rail franchising system and to re-nationalise ScotRail services. Under privatisation, the health and safety of rail workers is secondary to the profiteering of train operating and rolling stock companies. The Scottish Government must take steps to prevent a return to human effluent discharge from Abellio ScotRail trains on to the track, as a precursor to preparing to activate the break clause in the current contract between Transport Scotland and Abellio.

I look forward to your early reply on this urgent matter.