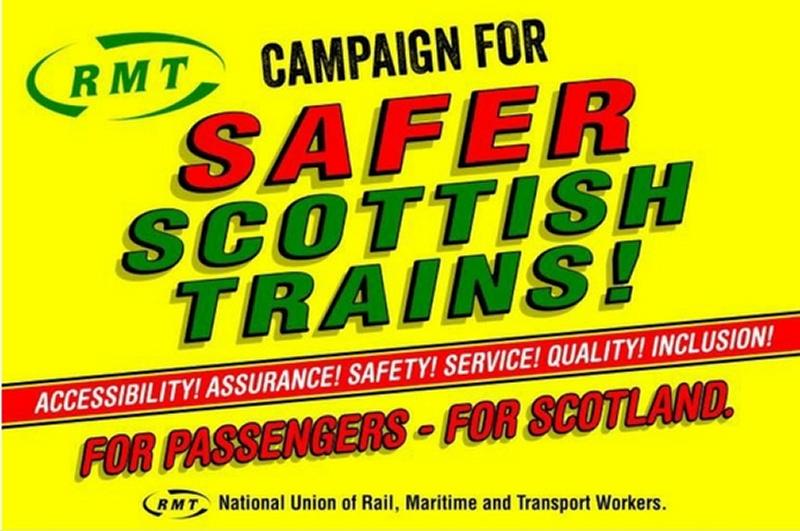 RAIL UNION RMT announced today that it will be holding a demonstration outside the Scottish Parliament on Thursday 8 September as part of its ongoing campaign for Safer Scottish Trains.

Activists will be assembling at 11am at Edinburgh Waverley Station before moving onto Holyrood for a protest outside First Ministers’ Question Time.

The key demands of the RMT’s Campaign for Safer Scottish Trains are:

•         Safe and secure for ALL. Fully accessible – for passengers with disabilities or mobility impairments.
•         Staffed by safety qualified, operationally trained guards (conductors.)
•         That for passenger safety and the safe despatch of trains – guards should control the train doors – making sure trains are safe to start – drivers should concentrate on driving the train.
•         An urgent review of safety and service quality of existing Driver Only Operated trains.
•         For safer trains we need safe tracks. There should be no cuts to infrastructure, track workers or rail operation staff.
•         Maintain and expand station staffing – we need to make sure our stations are welcoming and light – staffed and safe.

“We want to see a guard on every train who is fully safety qualified and operationally trained. That is the only way to guarantee a safe service.

“RMT is calling on the Scottish Government to launch an urgent review of safety and service quality on all Scottish trains, including Driver Only Operated services on the network.”

Ends
Note to editors:
RMT is asking MSP’s to sign Parliamentary Motion S5M-01161 in support of the Safer Scottish Trains campaign. The motion can be found here http://bit.ly/2bRxtvP