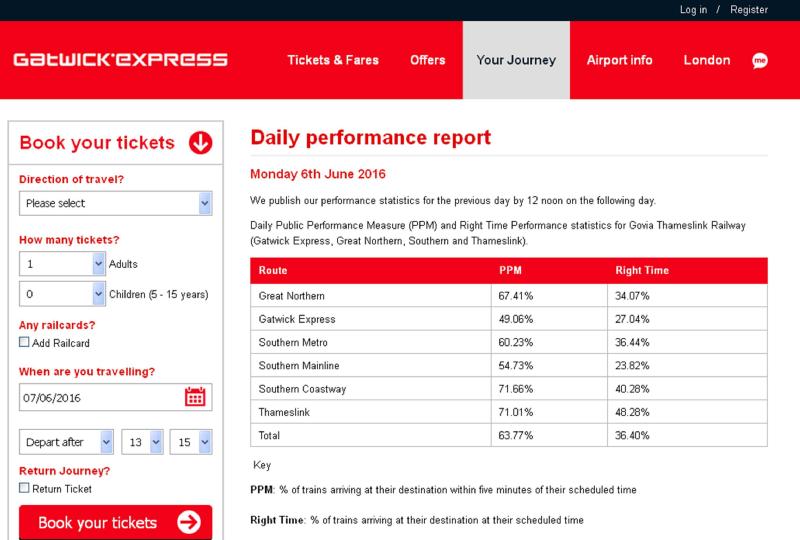 In a desperate attempt to further obscure the truth GTR are today holding an ‘information session’ between 12.30pm and 3pm in Dining Room B, a private bolt hole for corporate lobbying in the House of Commons, to brief MPs about their latest failures on the Southern franchise. To set the record straight, rail union RMT is today exposing GTR’s “Five Big Lies.”

Having been caught red handed lying to the public about the impact of staff sickness on the escalating crisis of cancellations and delays to Southern Rail services, GTR are seeking to excuse the fact that they are now well on course to breach the Remedial plan agreed in secret with Government in February. That plan, instead of rectifying failure increased the level acceptable to over 32,000 cancellations a year, which GTR are now just short of, as they cancel by their own admission, at least 83 trains a day.

This catastrophic failure rests wholly with an incompetent managers, poor planning and an orchestrated attack by GTR on its own workforce. Cynical attempts to blame ‎delays and cancellations on staff sickness, when they are in fact down to staff shortages created by a failure to recruit enough workers to fill new rosters, leaves their staff on trains and stations at risk and subjects the passengers to endless misery. The Remedial Plan clearly admits that the controversial and unpopular Driver Only Operation system already operated on part of the network has “significantly increased the number of incidents”.. “causing trains to be delayed and in some cases restricted to call at staffed stations only or cancelled.”

Whilst pretending they are “doing everything we can to avert any further industrial action” they refuse to explain why they will not discuss their proposals with the unions but simply insist that the changes will happen, have issued redundancy notices to staff and intend to go ahead with this regardless of the consequences both to individuals and passengers. It is high time GTR was stripped of this failed franchise and the government recognised that passengers have suffered long enough. It is high time GTR were held to account for their actions and not allowed to hide behind the lies and deceit of a crisis of their own making

RMT demands that those MP’s attending the event today ask GTR to answer the following statements:

Southern: "To be absolutely clear, we are not removing conductors from trains," Charles Horton, GTR Chief Executive Officer, on getSurrey website 19th May

The Truth: “We will be retaining some conductors on some coastal services” ...” Dyan Crowther, GTR Chief Operating Officer, told BB C Surrey. On BBC News website 28th May.

Southern currently have 470 conductors. They plan to retain 195 as Conductors and the rest will be made into On Board Supervisors (OBSs) which are not same thing. GTR state they will be able to run trains even if no Conductor or OBS is available. So trains will have the Driver as the only safety trained staff member on board, particularly in times of disruption when passengers want information from on-board staff more than normal.

Southern: “The only thing that changes is the new conductors will no longer close the doors...” Dyan Crowther, GTR Chief Operating Officer, quoted in the Evening Standard Wed 18 May

The Truth: GTR are removing the safety role of the Conductor in the new OBS role. It will not have the critical safety training required to act and protect passengers in an emergency. GTR’s have no plans for OBS to be re-assessed every two years in the extensive safety rules and procedures that Conductors are trained in. This means they will lose the licence proving they are competent in safety critical duties. If the driver is incapacitated who will protect the passengers and perform the vital safety measures needed to avoid collisions or ensure safe evacuations?

Southern: “As many services will have staff on board as they do today.” Charles Horton, GTR Chief Executive Officer, in Southern full-page ad in the Evening Standard Monday 16th May
“There will be the same number of people on trains as there are today”. On Southern website 18th May

The Truth: RMT is absolutely clear that the GTR proposals include extending Driver-Only operation (DOO) to all lines on the Southern network. DOO means what it says: that trains can run with the Driver as the only member of staff on board. At a meeting on 29th April to try and resolve this dispute, RMT asked GTR if they could guarantee that every train which now has a Conductor would in future have a second member of safety trained Southern staff on board. GTR refused to give this guarantee.

Southern: "We know passengers value face to face contact which is why our plans revolve around making staff more available. By removing the need for them to close the doors at each station they will be able to concentrate solely on helping passengers.”

On Evening Standard website Tue 17th May
The Truth: With the huge increase in passenger numbers trains departing from stations pose a real threat to safety and account for a high percentage of serious accidents and fatalities on the railway. That is why the Conductor currently closes the doors and carries out train dispatch at stations. The Conductor ensures everyone is safely on the service and that no one, especially children, the elderly, disabled or intoxicated customers are in a position of risk when the train departs.
During the journey the Conductor is there to ensure that customers are provided with assistance or reassurance. That may be because of security fears or being taken ill or having concerns about the behaviour of other customers.

Southern: "Despite repeated efforts over six months, the RMT seem unwilling to talk properly about this. Our door remains open to talks” Dyan Crowther, GTR Chief Operating Officer, quoted in the Evening Standard Wed 18 May

The Truth: RMT have been in many meetings with GTR and we are willing to meet at any time in the future. GTR will not negotiate on their proposals to extend DOO to all lines on Southern. They insist on simply stating what the new role will be, regardless of any issues this raises for our members, the passengers and other staff.  GTR are the ones refusing to talk.

The union also released performance data on the franchise that shows that on-time data this week has sunk as low as a shocking 36% and the overall performance is down to 63% - numbers that should trigger termination (table attached).

RMT General Secretary Mick Cash said:
“The GTR passengers and staff don’t believe a word that comes out of this collapsing rail company and there is no reason that MP’s should either.

“Cosy private chats, lined up by corporate lobbyists in the heart of the Westminster, will do nothing to sort the problems at the rotten core of this basket-case franchise. It needs real action and that means throwing these jokers off the routes and bringing the public sector operation in to take over before it is too late.

“Today we release the “Five Big Lies” at the heart of the GTR dirty-tricks operation. The MP’s should take note of what the staff and passengers are saying and ignore the garbage from the GTR spin machine and their team of political lobbyists.” 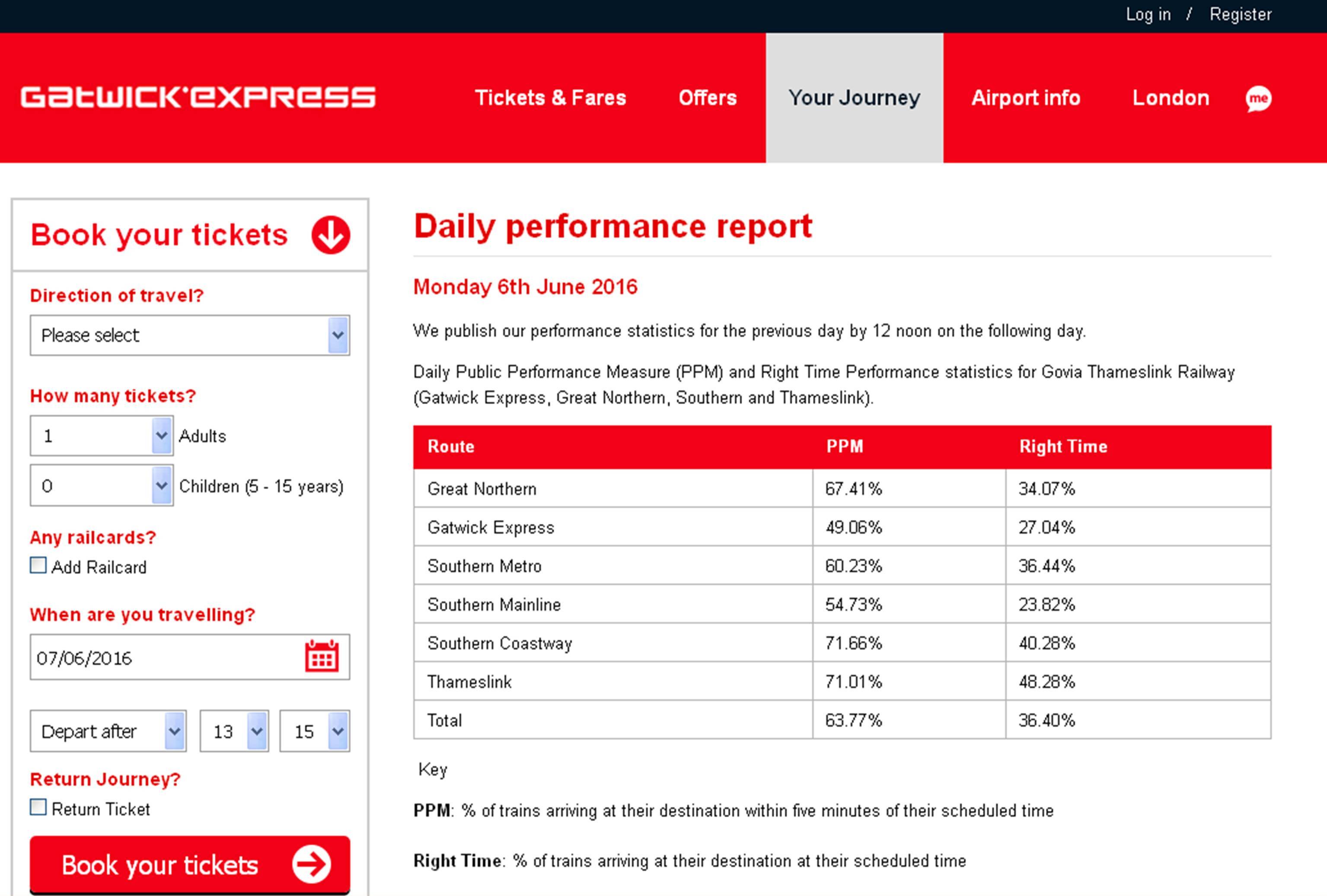