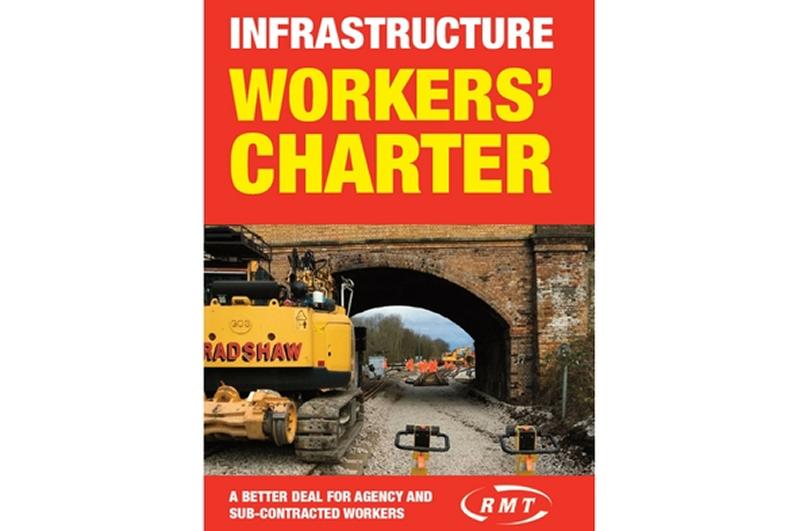 RAIL UNION RMT has launched a charter for rail infrastructure workers today outlining the appalling pay and conditions across contractor companies and agencies on the railway.

The charter was drawn up after consultation with infrastructure workers and RMT infrastructure reps working for companies across Britain. It claims that:  “simple fairness demands that two rail workers performing the same duties should be paid the same and have equal entitlement to leave, sick pay, pensions and other benefits. However, our analysis reveals astonishing abuses by employers and massive variation in their treatment of infrastructure workers, even those working for the same agency or contractor.”

Sections of the pamphlet explain how the industry is rife with: lay-offs, decreasing rates of pay;  sub-sub-contracting, on the spot sackings, bullying, poor health and safety, and a host of other poor practices.

The charter’s sets out its aims as:

“The culture of privatisation and sub-contracting has wreaked havoc in the rail industry, not least for the people who work in it.

“Across the rail network, where once we had central bargaining for standard pay and conditions for all infrastructure workers, there are now multiple contractors and agencies that seek to get as much as possible out of their staff for as little in return as possible.

“Many agency and sub-contract workers across the network find themselves in the worst of all worlds, engaged by agencies and sub-contractors that ‘outsource’ their pay and conditions to an accountancy firm, making them nominally self-employed, denying them the employment rights they should have and unable to establish who their employer is.

“This charter sets out our aim of improving pay, conditions, security of employment, pensions and health, safety and welfare – in short to bring an end to the exploitative conditions faced by infrastructure workers – and replace them with work conditions fit for the 21st century.”