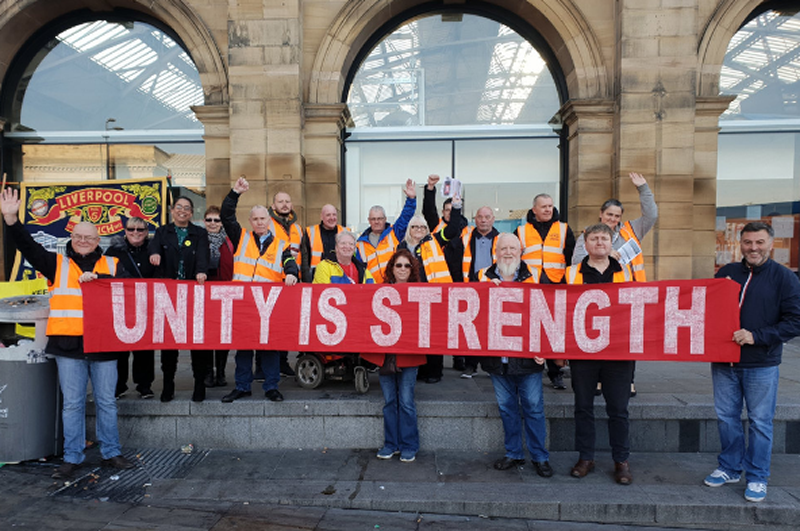 RMT members rock solid again this morning in continuing fight for safety on Northern Rail as union exposes surge in violent crime on our de-staffed railways.

‎RMT members rock solid again this morning in continuing fight for safety on Northern Rail as union exposes surge in violent crime on our de-staffed railways.

" RMT members are standing rock solid again this morning on Northern Rail in the continuing fight for safety, security and access on our trains and are angry and frustrated that the company continue to refuse genuine talks that could work out a deal that underpins the guard guarantee.

"‎This is the 29th day of strike action in the Northern Rail dispute  and our members remain absolutely resolute in the campaign for a safe, secure and accessible railway for all while the German owners of the company are quite happy to take a reckless gamble with pass‎enger safety."

"Police figures uncovered by RMT this week show that all crime in the area served by the Northern franchise increased by 4.09% to 7,611 offences in the year. Violence against the person has increased by a shocking 19.38%.‎

“No guard on the trains, combined with the destaffing of stations, is a toxic cocktail that gives the criminals a free hand on Britain’s violent railways. That's a culture Northern are quite happy to tolerate but it is one that the union will never accept.

"It is scandalous that while other train operators have been prepared to engage seriously with RMT on the crucial issue of a guaranteed second safety-critical member of staff on their services ARN have treated us with contempt and made a mockery of the talks process.‎ Northern should start talking seriously and they should start right now."