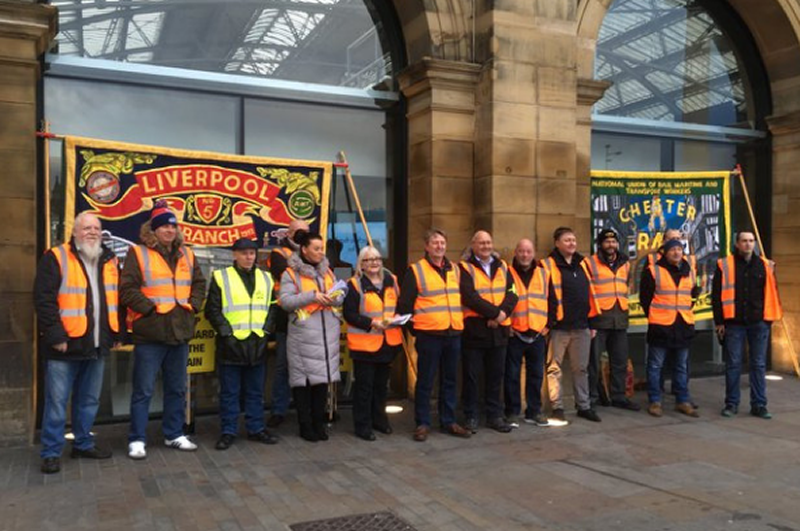 RAIL UNION RMT said that members are standing strong again today on the 35th day of strike action on Northern Rail in the fight for safety as the company continues to spin works of fiction over why they won’t sit down in serious talks with the union over the fundamental issue of the guard guarantee on their trains .

The action comes the day after the Government security minister, Ben Wallace, warned that axing guards from trains is a shot in the arm  for the thugs and criminals and specifically those exploiting vulnerable your people in county lines drug running operations. It is the first time that a Government minister has broken ranks and backed RMT’s case that Driver Only Operation is nothing short of criminal negligence by train companies chasing profits at public expense.

This week it was also revealed that Arriva, owned by German state outfit Deutsche Bahn, are in crisis talks with the Government as the basket case Northern franchise teeters on the brink of collapse despite soaking up more than a quarter of a billion pounds a year in subsidies from the British taxpayer. RMT says that the gross mismanagement of the franchise, and the drive to extract every last penny, is laid bare as the driving force behind the moves to axe the guards from more than half of the Northern Rail services.

Pickets are out in force at key locations across the North again today taking the case for putting safety before private profit directly to the public who continue to show strong support for their guards despite a barrage of propaganda from ARN designed to undermine, ridicule  and harass their own front-line staff whose only crime is to stand up for a safe and accessible railway for all.

“Our members on Northern Rail are standing strong out on the picket lines again this morning fighting for the principle of a safe and accessible railway for all in the teeth of the most appalling barrage of fiction and propaganda from a company that has chosen to rip-up the safety rule book as they cling to the wreckage of the Northern franchise in a desperate bid to extract every last penny they can.

“We now have the unprecedented sight of Tory Government ministers warning that Driver Only Operation is a gangsters charter and yet in the name of profit ARN are happy to give the criminals and thugs a free hand and axe frontline staff rather than sit down in genuine and serious talks with the union that could map out a way forward.

"It is disgusting that ARN are milking the taxpayer for over a quarter of a billion pounds a year in subsidies and can then secure an additional Government bail-out from public funds for loss of income during a strike - meaning that is in their financial interests to prolong the action as they can make more money from not running trains under the ludicrous and bent franchising system.