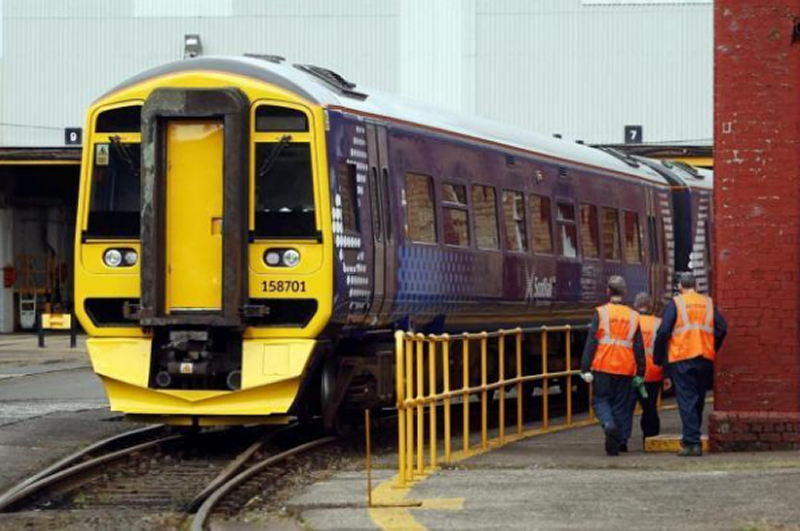 RAIL UNION RMT today called for the mobilisation of the broadest possible political and public support for a protest on Tuesday aimed at halting the proposed closure of the Springburn Rail Depot and the lifting of the threat to nearly 200 jobs and 160 years of train building, maintenance and engineering history on the site.

Campaigners are marching to the Scottish Parliament on Tuesday 19th February and will assemble at the top of Market Street, Edinburgh Waverley at 14.45 before moving off for the Parliamentary debate at 17.00 lead by Scottish Labour MSP James Kelly. Union members from Springburn will be in the public gallery.

In December last year, Gemini announced its intention to close the depot, threatening nearly 200 highly-skilled jobs. The Springburn depot carries out service, maintenance, repair, overhaul and upgrades on all of the ScotRail fleet. If the proposed closure goes ahead it will mean the repairs and maintenance of Scotland’s rail stock being carried out in England in what RMT calls an insult to the rail industry in Scotland and the sweeping away of 160 years of rail engineering history.

RMT General Secretary Mick Cash said:
“The planned closure of the Springburn Rail Depot in Glasgow is an act of industrial vandalism that will not go unchallenged and RMT is mobilising for the broadest possible campaign to halt these proposals in their tracks. We are calling for a big turn-out on Tuesday to ram home the message that Springburn is not for sale and to demand that the option of nationalisation be placed centre stage.

“The skillset that our members at Springburn possess is simply irreplaceable and, without action from politicians and governments in both Edinburgh and Westminster, would be lost forever. This is just another example of the fragmentation of the privatised rail industry where prime assets are passed from one speculative owner to another and would mean that a proud railway nation like Scotland loses a key engineering resource at the stroke of a pen regardless of the consequences for jobs, training and the local economy.

“RMT will stand shoulder to shoulder with anyone who is willing to join us in the campaign to save the Springburn Depot and ensure that skilled railway work continues to be carried out in Scotland.”