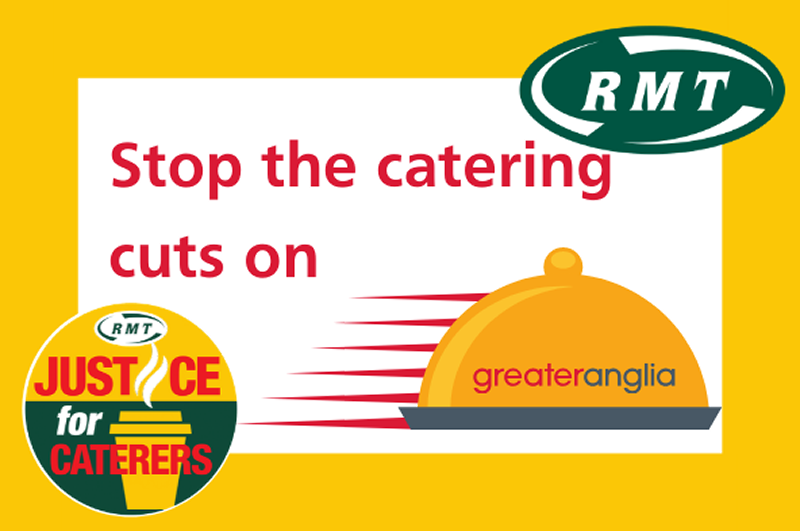 RAIL UNION RMT has condemned Abellio – the Dutch state owned operator that runs the Greater Anglia franchise – for proposing cuts to the catering provision on its services between Norwich and London Liverpool Street and is asking members of the public to sign an on-line petition opposing the plans.

Currently the majority of trains on this route have a buffet car service and during the week many trains have an additional trolley catering service.

The union is calling on people to sign an online petition, objecting to the cuts. The petition is available HERE

Abellio, which operates the Greater Anglia rail franchise is proposing to reduce the catering provision on its service between Norwich and London Liverpool Street. Currently the majority of trains on this route have a buffet car service and during the week many trains have an additional trolley catering service.

Under the proposals, a number of weekday and Saturday services would no longer have a catering provision, and no catering at all would be provided on a Sunday. The proposals would also lead to the buffet car being closed for periods during journeys.

RMT believes these proposals are about maximising profit by reducing staffing and will have a negative impact on passengers who value catering facilities on intercity routes.

Between 2014 and 2018, Abellio made a profit of £85 million on the Greater Anglia franchise, and paid out a massive £61 million in dividends to its private shareholders.

The union is also concerned that if these proposals go ahead, Abellio will attempt to cut the catering provision even further in the future. In fact, it has done so before – it axed the trolley service on the Stansted Express route.

RMT is calling on Abellio to halt these cuts and commit to retaining the current level of catering provision on its Intercity Service.

“RMT is under no illusions that these proposals are about cutting staffing and maximising profit.

“The union is calling on Abellio to halt these cuts and continue providing a proper catering service for its passengers and we are urging members of the public to back this campaign."