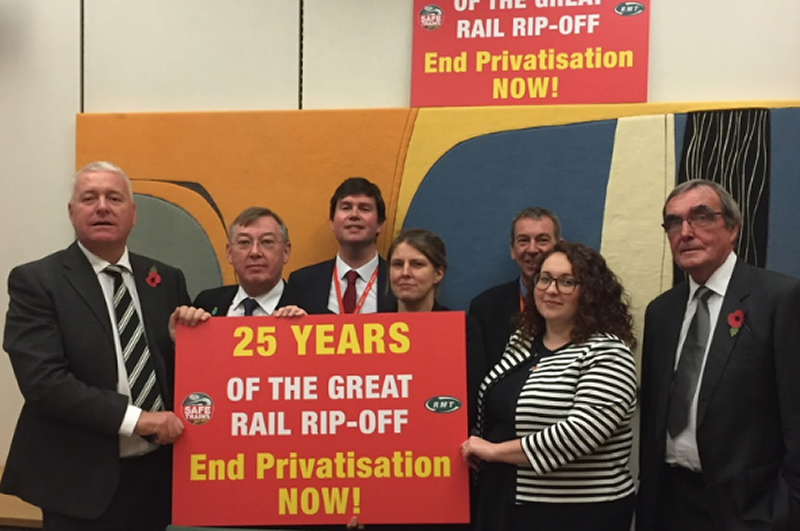 Rail union RMT will be holding a protest at Parliament today (Monday 5th November) demanding the repeal of the Act ushering in the privatisation of Britain’s railways exactly 25 years after it passed through the Commons.

With November 5th marking the twenty fifth anniversary of the passing of the Railways Act, which condemned lifeline transport services in Britain to a generation of fragmentation and exploitation, RMT will be launching a fresh drive to end the privatised rip off which has left passengers paying the highest fares in Europe to travel on overcrowded, unreliable services.

That means repeal of the 1993 Act to pave the way for the return of the entire railway to public ownership.

The protest will take place as follows:

“25 years since it was bulldozed through Parliament by a Tory Government hell-bent on wrecking our railways and carving up the remains for private profit it is time to repeal the 1993 Railways Act.

“In the time since it became the law of the land the Act has reduced services in the nation that gave the railways to the world to a global laughing stock where profiteering, overcrowding and unreliability are the daily reality for hundreds of thousands of passengers.

“We now have the ludicrous situation where the vast majority of our railways are in foreign state ownership with the profits they are racking up siphoned overseas to subsidise their own domestic rail operations.  Meanwhile, the British people are being bled dry, paying the highest fares in Europe to travel on rammed out, extortionate and unreliable trains.

“Today we demand the repeal of the 1993 Act and the end of the Great British Rail Rip-Off.   With 70% of the British people now backing the union campaign it is no longer a question of if our railways are brought back into public ownership, it’s a matter of when.”