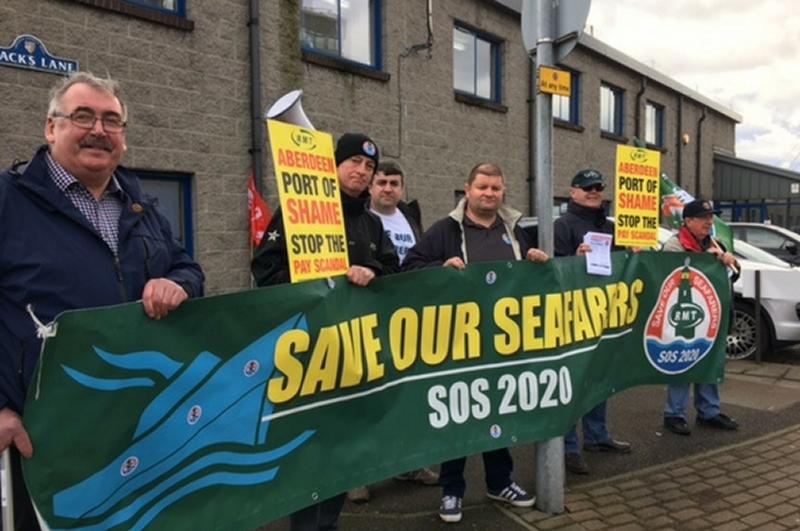 MARITIME UNION RMT has been demonstrating in Aberdeen today against poverty pay on Streamline Shipping’s MV Daroja. Workers are paid as little as £2.56 per hour on freight routes between Aberdeen and Orkney and Shetland on the Cyprus-flagged ship. Streamline has relentlessly profited from this exploitation, receiving over £3m from the Scottish taxpayer*.

RMT is calling on the Scottish and UK Governments to end Streamline’s profiteering off the backs of seafarers and the taxpayer by:
•             Enforcing National Minimum Wage legislation.
•             Requiring Streamline to comply with Work Permit regulations.
•             Increasing freight capacity in the Northern Isles Ferry Service contract.
•             Reviewing the MV Daroja’s safety record.

RMT General Secretary Mick Cash said:
“RMT has had an excellent response to our SOS2020 protest in Aberdeen this morning as we continue to put these ships of shame under the spotlight. Poverty pay on Streamline Shipping’s MV Daroja is a disgrace. We call on the Scottish Government to take action, as it did on Seatruck, where it has been agreed that they will pay at least the national minimum wage on the NIFS/Seatruck contract.

Has a very poor safety record, in addition to paying non-UK crew well below the NMW, as low as £2.56 per hour according to January 2017 ITF inspection. Involved in serious collision off Peterhead in 2015 and was again detained by the MCA on 29 November 2016 for a number of deficiencies, including the internal safety management system: https://www.gov.uk/government/news/foreign-flagged-ships-under-detention-in-the-uk-during-december-2016