RMT protest over threat to jobs, services and safety 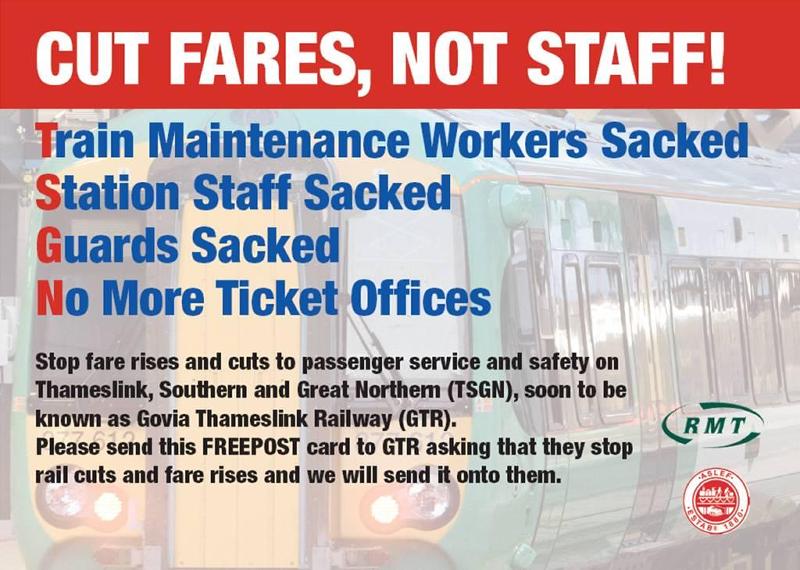 RMT protest over threat to jobs, services and safety as Britain’s biggest rail franchise kicks in

RMT, together with sister union ASLEF, is holding a protest at Blackfriars Station on the morning of Monday 15 September against the newly merged Thameslink, Southern and Great Northern (TSGN) franchise – which commences the day before.

The government has awarded the company Govia Thameslink the new TSGN franchise on the basis of extending Driver Only Operation (DOO), cutting station staffing and closing ticket offices. This jeopardises both the safety of the travelling public and the livelihood of our members.

In common with other new franchises with new rolling stock, maintenance staff contracts are also threatened as it is proposed that work be transferred to alternative depots. The government has declined to comment as to whether it believes the new franchisee is legally bound to honour members’ terms and conditions.

The new franchise will operate under the name Govia Thameslink Railway.

“Monday’s protest marks the beginning of a rolling campaign opposing the new franchise’s proposals for driver only operation and the sacking and reducing of the role of train guards and conductors, station de-staffing and the closure of ticket offices.

“Passengers can now expect to see fares go up and a less safe service as the franchisee tries to squeeze as much profit as it can from the operation.

“Privatisation of the railways has been a total disaster. Rather than creating a new super-franchise the government should be bringing this essential service back under public control.”