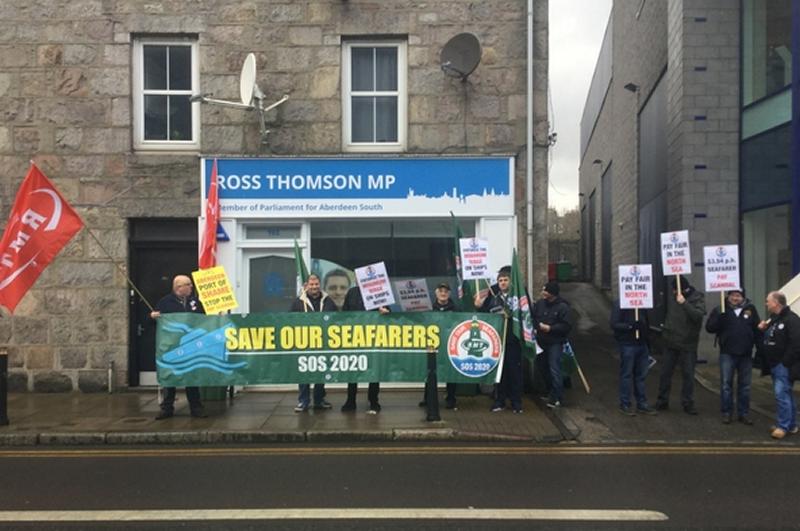 RMT, the union for Seafarers and Offshore workers, will take its SOS 2020 campaign for ending employment barriers to more jobs and training for UK seafarers and offshore workers to Aberdeen today, Monday 26 February.

In a two-stage demonstration, the union will protest outside the constituency office of Conservative MP for Aberdeen South, Ross Thomson demanding his support for the union’s campaign for enforcement of the National Minimum Wage on commercial vessels working from and between UK ports in the North Sea.

The second demonstration, outside Oil & Gas UK’s Aberdeen office will demand that employers in the offshore oil and gas sector work with trade unions to lift existing barriers to employment for offshore workers in Aberdeen, across Scotland and the UK. Over 160,000 jobs have gone on installations and across the supply chain in the UK North Sea since 2014 and increasing taxpayer support for extracting remaining resources and in decommissioning ageing infrastructure must be accompanied by compliance with UK employment law and full trade union recognition.

“RMT members, branches and officials are campaigning hard for more jobs and training for seafarers and offshore workers in the UK.
" Our demonstrations in Aberdeen demand a response from the local MP, Ross Thomson to the avoidance of the NMW which Aberdeen-based companies are engaging in through their crewing policies on offshore standby and supply vessels.
"Domestic seafarers cannot and should not have to compete with pay below the legal minimum in offshore supply, offshore renewables and decommissioning.
" Instead of phony guidance, the Tory Government must apply and enforce UK NMW pay rates for seafarers on all domestic and North Sea energy routes, in line with the RMT stated and re-stated in the Legal Working Group on Seafarers and the NMW.”

“These actions will further the vital aims of the SOS 2020 campaign and RMT’s Offshore Strategy.
"We demand that the local Tory MP stop waxing lyrical about tax cuts for oil and gas companies and start addressing the loss of jobs and skills in Aberdeen from the undermining of employment rights in the North Sea.
" RMT members are also taking that message to the Aberdeen office of the industry lobby group, Oil and Gas UK which routinely defends pay and employment practices that would be illegal on land and does nothing to promote trade union rights in the North Sea.
" Maximising Economic Recovery, decommissioning and offshore energy must mean jobs for UK offshore workers in every discipline.”

Steve Todd will be available for interview.