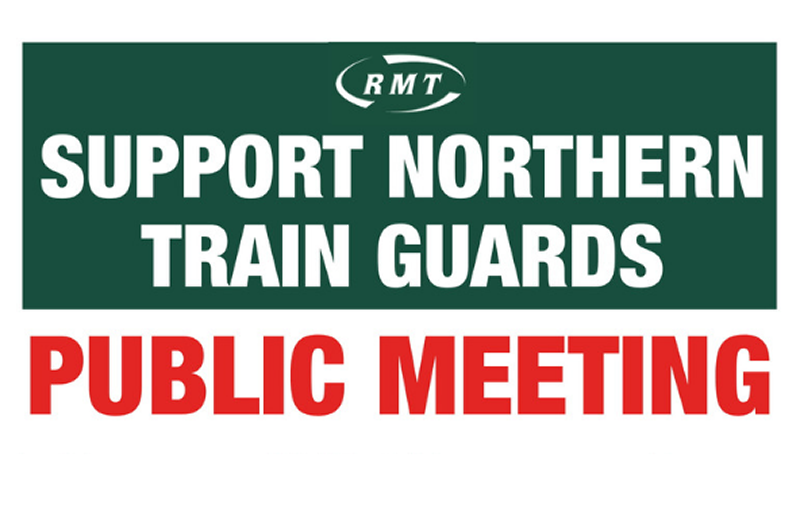 RAIL UNION RMT is holding a series of public meetings across the North starting tonight in Leeds in support of striking train guards.

The meetings have been organised to put across the union’s case for the guard guarantee and to build public and political support for RMT members continuing the fight for safe, secure and accessible rail services for all.

The meetings will be addressed by RMT officials, local MPs, and others. Additionally, local representatives from Transport for the North and rail campaigners have been invited.

The forthcoming meetings are:

“RMT is organising a series of public meetings in support of our Northern Guards. These will give us an opportunity to explain why Arriva Rail North refuse to come to an agreement that secures a guard on their trains even though the union has secured agreements on other franchises in England, Scotland and Wales that enshrine the guard guarantee.

“The union continues to make every effort to get serious and meaningful talks going with Northern but the company are not interested and would prefer to continue to bury their heads in the sand regardless of the impact on the travelling public.

“The basket case, German-owned Northern Rail - currently teetering on the edge of financial collapse and in crisis talks with the Government - want to run nearly half a million trains a year without a safety critical guard on board in a move that would wreck both safety and access ‎to services. They should listen to their front-line staff and pull back from that plan immediately.

“The meetings offer us an opportunity to thank the public for their continuing support and understanding that the Northern dispute is all about safety and passenger service.”

Meeting details can be found at https://www.rmt.org.uk/news/events/