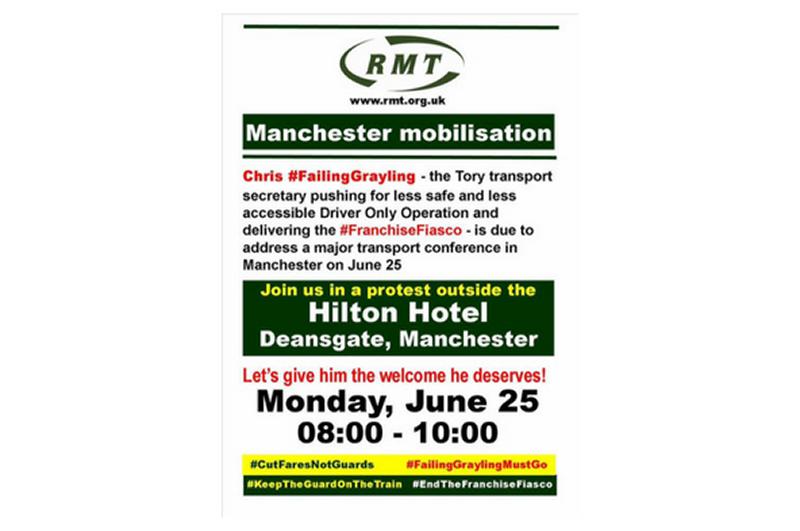 RAIL UNION RMT will be holding protests on Monday 25th June in Manchester and Edinburgh.

In Manchester RMT will be demonstrating outside a Northern transport summit where Transport Secretary Chris Grayling was due to speak until he cancelled on Friday, alongside Regional Mayors, Transport for the North and others responsible for the ongoing rail franchise fiasco and the plan to axe guards from Northern Rail trains.

The venue is the Hilton Manchester Deansgate Hotel, 303 Deansgate, Manchester M3 4LQ and activists will be outside from 8am - 10am.

In Edinburgh the protest coincides with the first day of the new Operator of Last Resort taking over the running of East Coast Main Line.

After three failures by private companies RMT is demanding that East coast be brought back into permanent public ownership and not simply run by contractors before being handed back to the private sector as a reward for failure.

This protest will take place at the Market Street entrance to Edinburgh Waverley Station from 7.30 am and also coincides with the first full day of RMT's 2018 AGM in the city.

"Britain's railways are in crisis and the responsibility for that rests with the rotten private franchising system and the profiteering, short-termism and fragmentation it brings with it.

"In Edinburgh we will be ramming home the point that after three private sector failures the routes should be made public on a permanent basis and in Manchester we will be shining the light on the continued failures of the shambolic Northern franchise."